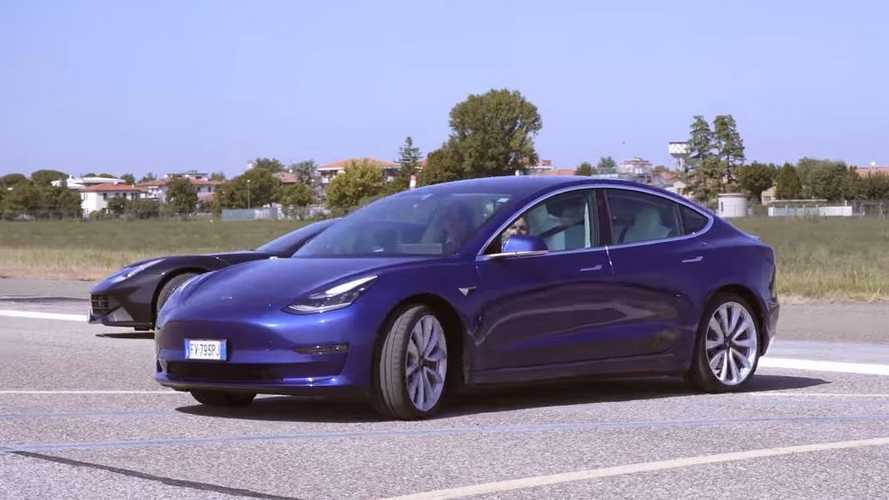 It's interesting to see how the Model 3 Performance stacks up to its flagship sibling.

Some of Tesla's fastest all-electric sedans recently faced down a powerful contender on an abandoned airport runway (turned into a drag strip). The contender? The feared Ferrari F12 Berlinetta. Racers call it the F12B — a 730 hp beast fitted with a 6.3L V12 engine.

Above: Tesla Model 3 and Ferrari F12 are ready to race (YouTube: Matteo Valenza)

In the past, the Ferrari F12 has impressed the likes of former Top Gear host Jeremey Clarkson with its remarkable performance. Recently, YouTuber Matteo Valenza decided to pit a Tesla Model 3 Performance, Model S P100D, and Model S P90D (now a discontinued pre-facelift model) against the $300,000+ Italian Stallion.

Drag races, both 200 and 400 meter, were organized by the crew. And even though the language in the video is Italian, English subtitles are also available so be sure to turn them ON to have some fun.

Matteo and the team posted some interesting results between the Ferrari F12 and some of Tesla's toughest competitors at the track. Surprisingly Model 3 Performance outran the Model S P100D in the 400 M segment with a 0.33-second lead. They even raced the Tesla Model 3 Performance on the drag strip in ‘Chill Mode‘, come on!

Okay, I'm sure the Ferrari fanboys out there will gripe about the fact that Ferrari's (partly) electric SF90 Stradale PHEV wasn't on the track to do battle. The $1 million Italian supercar would surely put Elon Musk's electric cars to shame, right? Ummm, not if Tesla's $200,000 Tesla Roadster was ready to rumble — if that were the case, you'd be looking at a full-on Supercar Smackdown.