The Media Seems To Have It Backwards Regarding Tesla Fires 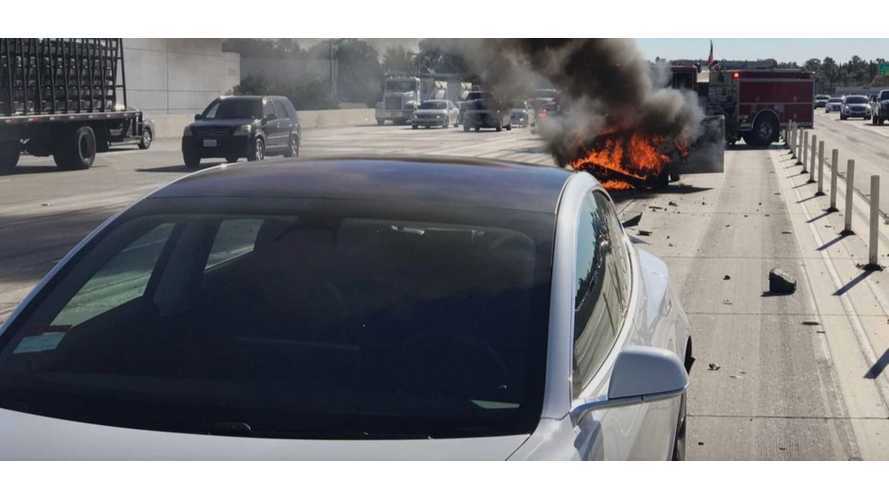 You put a cell phone in your pocket and battery-powered earbuds in your ears. What if they catch fire?

It’s human nature to worry much more about spectacular threats than about more quotidian perils - for example, people tend to be terrified of terrorist attacks, but cavalier about car crashes, although on an intellectual level they know that the latter is more likely to lead to their demise. When you add a new technology to the storyline, especially one that threatens to disrupt established economic interests, then peoples’ fear (to say nothing of uncertainty and doubt) kicks into high gear.

Above: Fire and flames were once used, ironically, as a decorative element on classic cars (Flickr: Paul Balze)

As a recent video from The Tech of Tech points out, lithium-ion batteries are all around us. We carry them in our pockets, allow our children to play with them, and even stick them in our ears. Statistically speaking, they’re very safe, but like anything that stores large amounts of energy, they can and do catch fire and/or explode. And on those rare occasions when the battery in a Tesla goes kablooey, a veritable school of sharks instantly appears (maybe alligators, too). Stock market short sellers, click-hungry gutter journalists, tech-hating Luddites, oil-fired anti-EV activists, all rush to join the feeding frenzy.

A headline about a Tesla fire is a guaranteed gold mine of clickthroughs. But in fact, battery fires in Teslas (or other EVs) are quite rare compared to fires involving gas vehicles. Steve Hanley, writing in CleanTechnica, reminds us that there are around 150 fuel fires in vehicles in the US every day. According to a recent 2014-2016 FEMA report, there were an estimated 171,500 highway vehicle fires each year in the U.S., resulting in an annual average of 345 deaths.

Above: A look at car fires for gasoline and diesel-powered vehicles vs. electric vehicles (Youtube: The Tech of Tech)

Such incidents aren’t considered national news, alas, so the poor sharks must bide their hungry time until the next battery fire. Many of the predatory media tire of waiting, and resort to crafting headlines in such a way as to make any incident involving a Tesla or other EV sound like a Big Bad Battery Boom.

A recent example from the Detroit Free Press: “Electric Car Batteries Can Catch Fire Days After An Accident.” Yes, this can happen (it’s caused by a rare malfunction called thermal runaway, which is discussed in the recent Tech of Tech video). However, the headline makes scary clickbait out of what is actually a more mundane (and more interesting) topic. If you trouble to read the article, you’ll find that it’s about the special challenges first responders must deal with when an EV is involved in an accident. This is an important issue, and automakers and emergency service providers have been working together to address it for several years. SAE published a technical standard listing best practices for first responders in 2012.

Above: The only fire commonly seen in a Tesla is 'Romance Mode' when it's played on the center touchscreen (Image: Wes Bard)

Another tendentious headline, this one from The Guardian: “Electric vehicle drivers at risk by charging from home mains supply.” Apparently many of our English cousins have been charging their EVs from wall sockets, using household extension cords that aren’t suitable for outdoor use, sometimes even “daisy-chaining” several cables to reach their vehicles. No, loves, this is not cricket, as the charity Electrical Safety Firstrightly points out. ESF sees this as a failure to provide enough public charging facilities, and it’s a fair point - many UK drivers don’t have carports, or even assigned parking spaces, and so are unable to install proper home charging stations as we suburban Yanks do. However, charging your EV at home, as most owners do, is quite safe when you follow basic electrical safety rules (the Guardian piece cites no examples of any injuries or fires). Of course, gassing up is usually safe enough, too, although tragic accidents do occur, as they recently did in Virginia and North Carolina.

An especially egregious example of a hopped-up headline is this one from the Mercury News: “Two sisters trapped in burning car, one dead in collision with Tesla in downtown Berkeley.” As Steve Hanley notes, this was a terrible accident that no one should make light of - one person was killed and another seriously injured. However, contrary to what the headline suggests, the Tesla did not catch fire. The article states that it was a Ford Fiesta that burst into flames after being rear-ended by a Tesla (after the Tesla driver apparently suffered a medical problem). Fiery crashes are a tragically common staple in daily newspapers, but how many headlines specify the make of (one of) the vehicles involved?