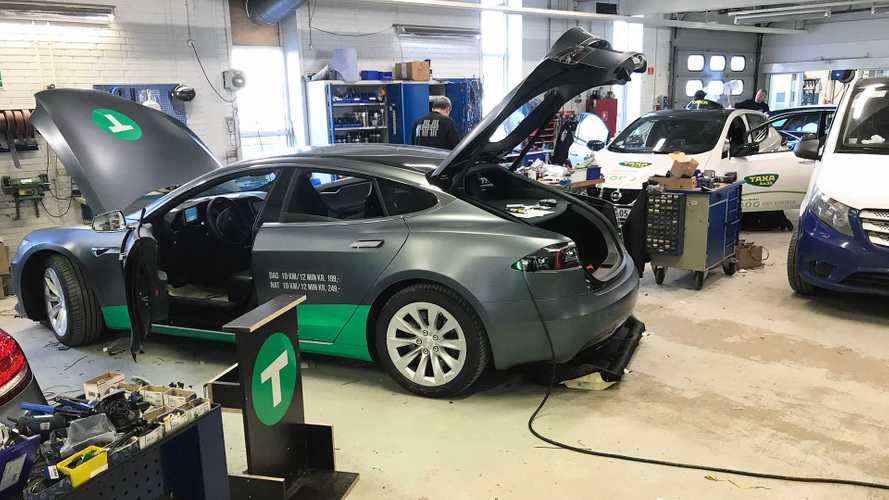 Sales of EVs are booming in Norway, but the electric-car market in nearby Denmark was decimated in 2015 when its government reduced the country’s zero-emission incentives. That’s why I paid a recent visit to RTT, a Copenhagen-based auto retrofitter, to better understand why the country’s largest taxi company is converting 10 Model Ss for use as cabs.

In Denmark, the purchase of all cars is commonly taxed at 100 percent. That’s not a typo. The Danish government effectively doubles the cost of buying a vehicle regardless of powertrain. When that tax was removed for EVs, sales of electric vehicles shot up to about 5,000 units in 2015.

But when a change of government brought back most of the tax on EVs, the market collapsed to about 700 units by 2017. Other EV incentives, such as access to fast-moving bus lanes, special parking, and free toll access, are also gone.

“Today there are little economic incentives for buying an EV. Everything just stopped,” said Carsten Aastrup, chief executive of Dantaxi, which bought 10 2018 P75 Model Ss and quickly resold them to taxi drivers. Cars used for taxi service are not subject to the tax – but the tax is applied to the second buyer when the vehicles are sold as used. Dantaxi used its purchasing scale to get a good price on the Teslas, making it easier for drivers (who own the vehicles) to buy them.

Aastrup made the effort to introduce the Model S taxis for both business and environmental reasons. “Our aim is to push forward with the technology,” he told me. Also, despite the removal of the tax breaks for EVs, the Danish government will require that all new taxis be zero-emissions by 2025. And by 2030, all passenger vehicles must be zero-emissions.

CEO Aastrup is no stranger to EVs. He attended the unveiling of the Model S at Tesla’s Fremont factory in 2012 and then helped put a single Model S into the Dantaxi fleet in 2013. Aastrup also champions the success of three Dantaxi Teslas driven by three brothers in Mors, near Denmark’s west coast.

Aastrup is not concerned about adequate charging for the 10 new Tesla taxis. When the incentives were in place a few years ago, public EV charging was quickly installed – in anticipation of brisk electric-car sales that never materialized. “Copenhagen has the most well-developed but unused charging network in the world,” said Aastrup.

Meanwhile, luxury vehicles like Teslas – even with no emissions – are currently taxed at the nearly country’s highest rates. The base price of a Mercedes E200, which Aastrup says is the company’s most popular taxi model, sells for the equivalent of about $42,000. That’s a lot more affordable than a Tesla Model S, which sells for about the equivalent of $100,000. For an individual consumer, the tax can more than double the purchase price. Talk about a Tesla killer.

Three of the 10 new Dantaxi Teslas

When the Tesla Model S taxis hit the street, Dantaxi customers can use the company’s app to request a zero-emissions ride. Aastrup believes that customers will love the option. But he also wants to help achieve the bigger goal of jumpstarting EV sales in Denmark. “It’s important. Somebody needs to do it,” he said.

Aastrup is hopeful that the political tides will change in Denmark and the necessary EV incentives will return – and Dantaxi will then have a head start with electric taxis. “It’s just a matter of time,” he said.