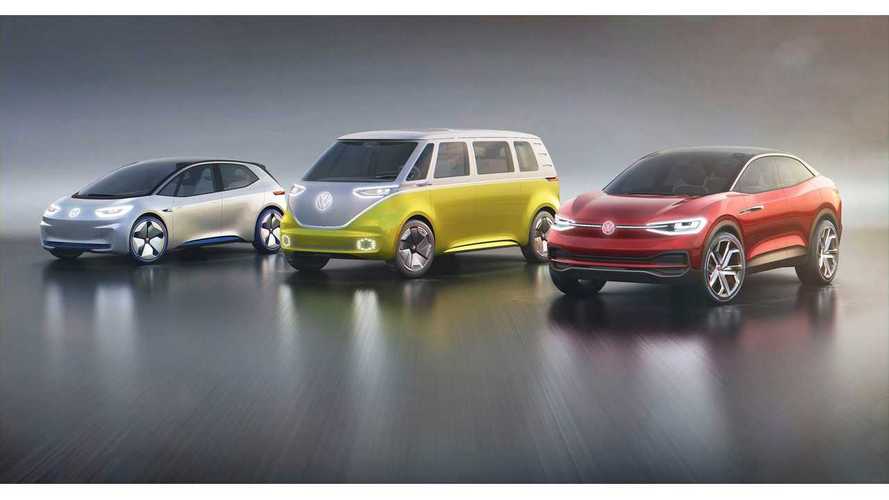 The automaker may redeem itself yet.

Volkswagen Group is serious about electric vehicles. It may not look that way if you judge by its battery-powered cars on the road today -- in the U.S., it currently offers only the Volkswagen e-Golf. But, its various brands will be producing millions in just a few years from now. In fact, it's just increased its planned output from 15 million to 22 million over the next ten years. That's ambitious by any standard.

VW: All Our Electric Car Platforms Are Yours: Opens Up MEB EV To All

The boost in production expectations comes with a dramatic increase in the number of models that will be offered. Previously, it had planned on 50 different models. Now, that number is 70. They will, of course, be spread across the dozen brands it now owns, though we can expect them to be concentrated on the Volkswagen, Audi, Seat, and Škoda marques.

The models will, for the most part, be based on the MEB (Modular Electric Toolkit) platform. That's what will underlie the production forms of the VW I.D., the I.D. Crozz, and I.D. Buzz, as well as the Audi A4 e-tron, Seat el-Born, and Škoda Vision iV we just saw revealed at the Geneva Motor Show.

Importantly, the company also says it is implementing a comprehensive decarbonization plan and is targeting 2050 as the date to be completely CO2-neutral. That would put it in line with the goals set out in the Paris Climate Accord.

Besides its own vehicles, the Group has also stated it will offer its MEB platform to other automakers, which could create an even greater result than outlined by this announcement. So far, it has had one outfit, e.GO Mobile AG, say it will take it up on that offer, but we would not be surprised to see the previously-announced partnership with Ford eventually lead to Blue Oval MEB vehicles.

While there remains some amount of skepticism out there -- the dieselgate scandal is still fresh in the minds of many -- we believe Volkswagen Group is now laying the redemptive groundwork necessary to be the world leader in electric automobiles in the very near future. While it does concede that Tesla owns half the market, it has its sights set on the rest.

Check out the official press release below for more details.

The Volkswagen Group is forging ahead with the fundamental change of system in individual mobility and systematically aligning with electric drives. The Group is planning to launch almost 70 new electric models in the next ten years – instead of the 50 previously planned. As a result, the projected number of vehicles to be built on the Group’s electric platforms in the next decade will increase from 15 million to 22 million. Expanding e-mobility is an important building block on the road to a CO2-neutral balance. Volkswagen has signed off a comprehensive decarbonization program aimed at achieving a fully CO2-neutral balance in all areas from fleet to production to administration by 2050. Volkswagen is thus fully committed to the Paris climate targets.

Dr. Herbert Diess, CEO of Volkswagen AG, said: “Volkswagen is taking on responsibility with regard to the key trends of the future – particularly in connection with climate protection. The targets of the Paris Agreement are our yardstick. We will be systematically aligning production and other stages in the value chain to CO2 neutrality in the coming years. That is how we will be making our contribution towards limiting global warming. Volkswagen is seeking to provide individual mobility for millions of people for years to come – individual mobility that is safer, cleaner and fully connected. In order to shoulder the investments needed for the electric offensive we must make further improvements in efficiency and performance in all areas.”

The Volkswagen Group has set milestones in all areas to be achieved in the coming years on the road to complete decarbonization by 2050. The measures follow three principles: first, effective and sustainable CO2 reduction. Second, switch to renewable energy sources for power supply. Third, compensate for remaining emissions that cannot be avoided. In order to improve the CO2 balance of vehicles throughout their lifecycle, for example, Volkswagen has already made a start on the supply chain. A detailed roadmap is currently being drawn up. There is particularly significant potential as regards steel and aluminum supplies.

The 2025 target is to reduce the CO2 footprint of the vehicle fleet by 30 percent across the lifecycle compared to 2015. Volkswagen is therefore electrifying the vehicle portfolio, with investment in this area alone amounting to more than €30 billion by 2023. The share of electric vehicles in the Group fleet is to rise to at least 40 percent by 2030. The first of the new-generation electric vehicles go into production this year: the AUDI e-tron1* will be followed by the Porsche Taycan2*. Reservations for each of these models already total 20,000 units. And electric vehicles will be brought into the mainstream with the ramp up of the Volkswagen ID. Other models in this first wave will be the ID. CROZZ, the SEAT el-born, the ŠKODA Vision E, the ID. BUZZ , and the ID. VIZZION.

In order to support the electric offensive, LG Chem, SKI, CATL and Samsung were selected as strategic battery cell suppliers. In view of the constantly increasing demand, Volkswagen is also taking a close look at possible participation in battery cell manufacturing facilities in Europe. Looking further ahead, solid-state batteries also have great potential. The goal is to enable an industrial level of production with this technology together with our partner QuantumScape.

At the same time, CO2 emissions at all plants are to be cut 50 percent by 2025 compared with 2010. The conversion of the power station in Wolfsburg from coal to gas will reduce CO2 emissions by 1.5 million tonnes annually from 2023 onwards. Audi’s production activities at the Brussels site, for example, are already completely CO2-neutral. The Zwickau plant will not only be the lead factory for the Modular Electric Drive Toolkit (MEB); the ID. built there will be delivered to customers with a CO2-neutral balance.

The MEB lies at the heart of Volkswagen’s electric offensive. The cost of e-mobility can be significantly lowered through partnerships to enable the widest possible spread of the MEB and the associated economies of scale. That makes individual mobility affordable and usable for the mainstream in the future as well. One example of such a partnership is the planned cooperation with Aachen-based e.GO Mobile AG recently announced at the Geneva International Motor Show.

To boost e-mobility further, we will be installing 400 fast-charging stations along Europe's major roads and highways by 2020 in collaboration with industry partners in IONITY. 100 of these will be located in Germany. That means there will be a station every 120 kilometers. Elli (Electric Life), Volkswagen’s new subsidiary, will also offer wallboxes for charging at home, using green power – initially in Germany. In addition, there will be 3,500 charging points on employee car parks at all plants with further charging opportunities at dealerships.