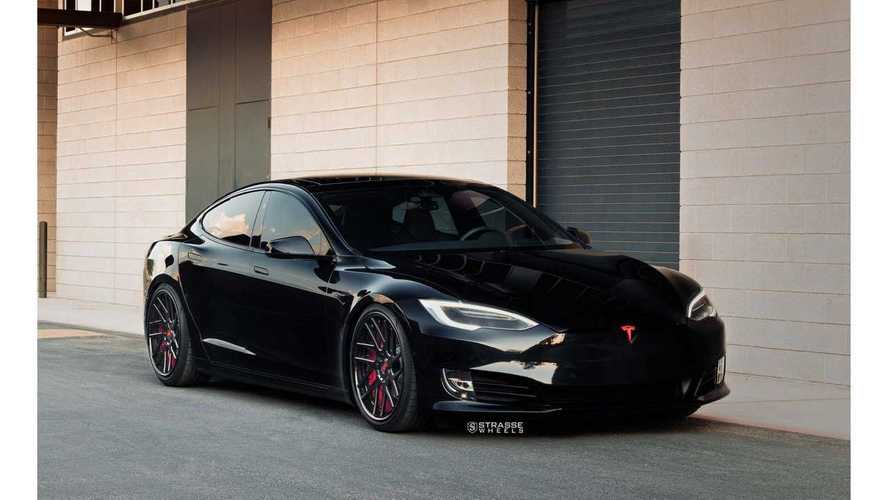 The Dark Knight is back, this time with 21" Strasse Wheels

For the recent few months, there's been a steady flow in of rather interesting looking Tesla Model S aftermarket builds. This is mostly due to the vehicle's popularity, but also, the more acceptable price point of used Model S vehicles. For this particular Model S, going dark is the theme. And we have nothing against it- whatever some may say.

This particular vehicle is a Tesla Model S P100D.  Coming with a well-familiar dual-motor setup, the P100D excels in straight line performance. The vehicle uses a massive 760 horsepower and it affords the owner with the all-too-familiar tire screeching sonata at the tune of 722 lb-ft of torque. The Model S P100D will sprint from 0-70mph (0-100km/h) in just 2.68 seconds, making it one of the fastest street legal, mass-produced vehicles in the world.

The Model S comes with a dual motor setup delivering 760 horsepower, while the same setup in the Volkswagen I.D R Pikes Peak delivers 670 horsepower. Torque wise, the difference is even more pronounced. The Tesla plays the all-too-familiar tire screeching sonata at the tune of 722 lb-ft of torque. On the other hand, the VW I.D R will utilize "just" 479 lb-ft of torque. However, the VW’s racer weighs a little over a metric tonne (2,204lbs) - less than half the weight of the 2,241kg (4,940lbs) Tesla P100D.

For this Model S, the owner wanted to give his vehicle a more menacing look. This is done due to a completely blacked out exterior, matched with red details such as the Tesla logo in the front and in the rear. Furthermore, the most impacting part of this build are the directional Strasse Wheels. Coming in at a whopping 21×9 at the front and 21×10.5 at the rear, these wheels help fill out those huge wheel arches perfectly. Naturally, the wheels come in Gloss Black, perfectly revealing the bloodshot red brake calipers behind them.

You can view the full build gallery of this Model S P100D right below.