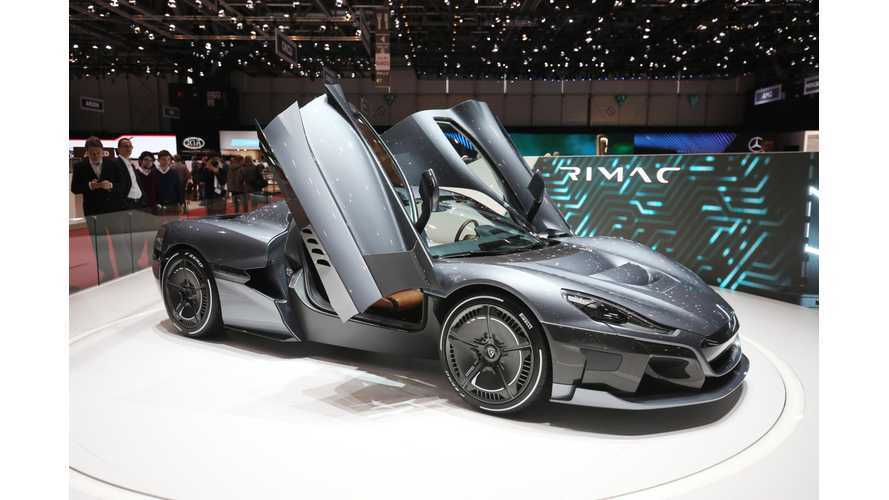 Porsche AG announced it has bought a minority stake of 10% in Rimac Automobili and its subsidiary Greyp Bikes.

The German manufacturer appreciates what Rimac Automobili has achieved so far and is looking for a development partnership.

The investment is especially interesting because Porsche already progressed a lot into electric cars on its own, by developing the Mission E (now known as the Taycan).

Founder and CEO of Rimac Automobili, Mate Rimac, remains the majority shareholder after the series B round led by Camel Group Co. Ltd.

Besides being a supplier to other manufacturers, Rimac Automobili is also a small manufacturer best known for its Concept_One electric hypercar. The new generation version - Rimac C_Two, unveiled in Geneva, is a real monster with 1.408 kW of power that is expected to go 0-60 mph in 1.85 seconds (*acceleration times with one foot roll-out).

"The partnership aims to support Rimac’s and Greyp’s advanced technologies and their positioning as the leading niche EV technology suppliers and high-performance electric vehicle manufacturers."

"Rimac is a technology powerhouse providing EV solutions to global automotive manufacturers and developing and manufacturing high-performance electric vehicles. Mate Rimac’s vision began as a garage project in 2009 and hs grown into a 400-people company on the outskirts of Zagreb, Croatia. Its subsidiary Greyp Bikes aims to deliver the most advanced electric bicycle on the market. Both companies are growing exponentially to meet the challenges of market dynamics.

The new funding round should boost the business and support the global expansion of Rimac and Greyp. As a co-investor in Rimac's series B round led by Camel Group Co. Ltd., Porsche AG concludes the company’s second capital raising round. As of June 2018, the founder and CEO Mate Rimac remains the majority shareholder."

“In less than a decade we have built up a comprehensive know-how in developing high-performance electric powertrain and battery technology, innovative infotainment and telemetry systems and many other core vehicle systems. Our hypercars are at the pinnacle of technology, redefining the idea of the supercar. Still, building a serious automotive supplier and niche sportscar manufacturer is a lifetime challenge and we still have a long way to go. Entering the collaborative partnership with Porsche AG is an important step in our strategy to become a leading EV technology supplier to the global OEMs. We are delighted to have gained a high level of trust from our investors, partners and customers and are looking forward to continue working on exciting projects with our clients across the automotive industry.”

“By developing the purely electric two-seaters super sports cars, like the ‘Concept_One’ and ‘C Two’, as well as core vehicle systems, Rimac has impressively demonstrated its credentials in the field of electromobility. We feel that Rimac’s ideas and approaches are extremely promising, which is why we hope to enter into close collaboration with the company in the form of a development partnership.”

Rimac Automobili is – by automotive industry standards – a rather small company. Some may even call it a startup. But the fact remains; Rimac Automobili employs some of the brightest minds in the fields of engineering, design, and planning, as they’ve ventured from just a few employees a decade ago, to over 400 people of various callings, degrees, and expertise that are currently employed in their three offices in Croatia. Additionally, the company is slated to expand even further, as their design and production facilities are under big construction in a small city near Croatian’s capital, Zagreb. In turn, this will allow Rimac Automobili to further satisfy the growing demand set by their numerous contracts and OEM supply agreements made with some of the biggest names in the car industry. Thus, the deal with Porsche AG – even though huge for the small company like Rimac – shouldn’t surprise anybody.

We can only guess the technology these two companies will be working together, but we’re certain the recently renamed Porsche Taycan will soon – if not already – become part of the mix. With the advent of the electric hypercar, the pressing ecology concerns and the quest for more power, improved handling and better driving range, smaller tech companies like Rimac Automobili seem like a clear-cut case of a great investment for the old guard like Porsche.

Clearly, the electric sports car age is upon and it will be interesting to see what the next 4-5 years hold for the automotive industry. We have no doubt that the long-standing tradition, expertise, and know-how of Porsche AG will greatly gel with the up-and-coming knowledge and ideas from Rimac Automobili. After all, who can say no to a sub 3.0 seconds 0-62mph (0-100km/h) accelerating, lightweight, torque vectoring beast of a Porsche 911 derivative? We certainly can’t.