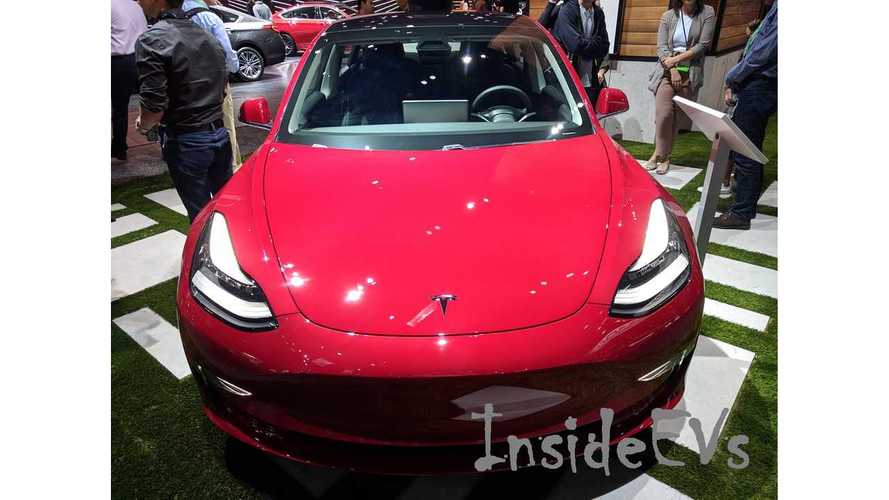 TESLA HOLDS A PRIVATE EVENT FOR MODEL 3 IN MIAMI

Late Wednesday afternoon, I received a text from my wife: “Did you get the invitation for the Tesla (Model) 3 in Aventura mall?”  My response: “?!?!?”  Tesla sent her an email for an invitation-only event to celebrate the grand re-opening of the Aventura store in Miami, guest starring Model 3.  Needless to say, I was extremely excited to check it out.

We arrived at 7 pm on the dot, but it seemed the party had already started without us — a few people had started entering the store.  Outside, guests were checking in with Tesla staff confirming their reservations on tablets.  Black curtains covered the store windows, and they literally rolled out the red carpet for us.  Maybe I should have worn my tux.

The music was pumping with some Latin flair for the South Florida crowd.  Of course, no red carpet event would be complete without a step-and-repeat backdrop and bright lights for photo ops.  The backdrop was simply a big “3”.  It was nice to get a small taste of Tesla's West Coast events here on the East Coast, even if it wasn’t quite as grand.

*This article comes to us courtesy of EVANNEX (which also makes aftermarket Tesla accessories). Posted by Matt Pressman.

As we walked in, we were offered glasses of champagne and we gladly accepted.  Attendees were presented with hors-d'oeuvres, and Tesla set up a couple of bars with sodas, cocktails, and wine.  They did an excellent job of accommodating guests and making us all feel very welcome.

Inside the store, there was a red Model S on the right, a white Model X on the left, and center stage was the guest of honor, a midnight silver Model 3.  It was my first time seeing Model 3 up close in-person, and it looked every bit as good as it did in the hundreds of photos I had seen prior online.

There were plenty of product specialists on-hand to answer questions, dressed in formal attire rather than their typical business casual Tesla-branded garb. One big question on my mind which I asked the Tesla staff: When is the Standard Range model coming to market?  Unfortunately, as I expected, there was no definitive answer. However, there was an announcement that Brickell city supercharging was being inaugurated locally this week.

The line to sit in Model 3's front seat was growing rather quickly, so we patiently waited with many others for our chance to sit behind the wheel.  Our Model 3 has been on order since the day of the reveal and is to become my wife’s car.  She had the privilege of sitting in the driver’s seat while I rode shotgun.

As for as the car itself, I don’t really have much to say that hasn’t already been documented in countless articles and videos out there.  However, if you must know, the roof lining was indeed textile, not Alcantara. And, no, I did not get the VIN.  I was so excited to see the car I forgot to check!

As we departed for the evening, the Tesla team gave us a little keepsake as thanks for our support of Tesla and Model 3.

It’s great to see Model 3 making its way into showrooms on the east coast.  This particular Model 3 will remain on display at the Aventura store.  If you live in South Florida, stop on by and check it out!  Unfortunately, it'll likely be some time before they’re available for test drives.  The product specialists haven’t been informed yet as to when, so as of now it’s anyone's guess.

Above: A look at the Tesla Aventura event invite and around 150 guests swarming the in-store Tesla display cars including the star of the show — a midnight silver Tesla Model 3 along with a pearl white Model X and multi-coat red Model S. The "3" logo was prominent inside the store. Early vehicle design sketches were also showcased on screens. (Photos: Jorge Sierra)

*Jorge Sierra is a member of the Florida Tesla Owners club and has been a Tesla Model S owner since June 2014. Jorge loves driving electric and has been averaging about 30,000 emission-free miles per year since having first taken delivery. He's also developed Radar Alerts for Tesla owners.