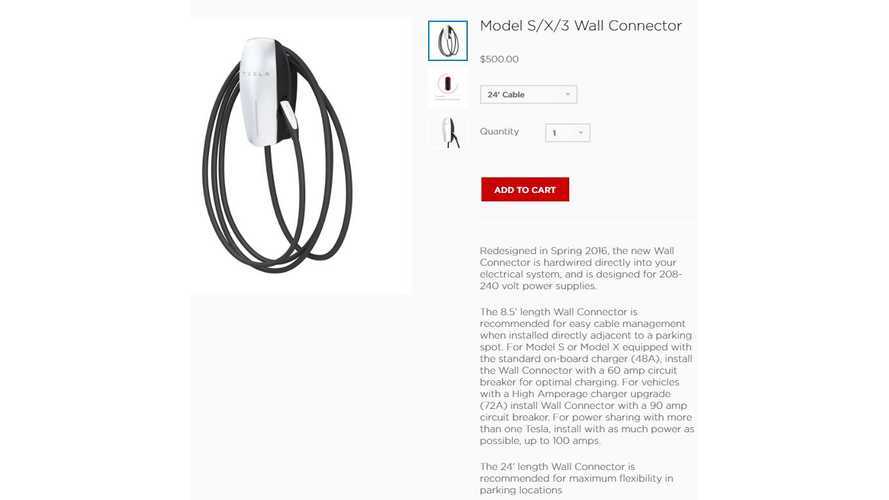 Tesla's high power wall connector was already the best bargain on the market given its capabilities, but now that the 24-foot cable version is some $50 cheaper, the HPWC is unmatched.

Sometime last week, Tesla quietly updated its website with a price drop for the long-cable version of the Model S, 3 and X wall connector. The 24-foot version dropped from $550 to $500, making it identical in price to the 8-foot cable version. It's now a no-brainer as to which version to choose.

We learned of this price drop via a post by  Ivan Karpenko on the Tesla Model 3 group page on Facebook. Karpenko stated:

Karpenko later updated his post with this additional information:

Called Tesla's customer service @ (650) 681-5100 and am told by a rep that there should be a price difference between the 8' and the 24' charging cable. However the online shop shows same price @ $500. I’m told that the website had a recent update and the two reps I spoke to weren’t notified about price change but that it is correct.

The wall connector is capable of supporting up to 100 amps. At $500, there's no other charger out there that's even close to matching the power of Tesla's own connector. Those in the know believe that Tesla is actually taking a lose on each 24-foot wall connector it sells. This may or may not be true, but one things for certain, Tesla buyers needn't look aftermarket for a better bargain on a high power home charger.