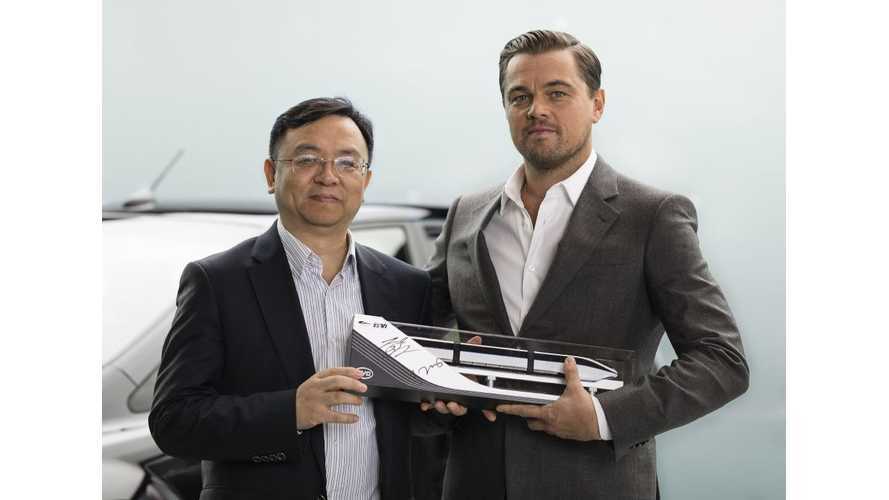 BYD and Leonardo DiCaprio announced today that the Academy Award-winning actor has signed on to promote electric vehicles in China as the brand's new ambassador.

DiCaprio is known for his environmental activism, having recently met with President-Elect Trump on the subject, and by taking a leading roll in the climate-change documentary "Before the Flood", and also serving as the UN Messenger of Peace on the subject.

For 2016, BYD is the largest manufacturer of plug-in vehicles (or New Energy Vehicles as it is termed locally in China), of which BYD says is part of its "Cool the Earth by 1°C” campaign for the creation of a “Zero Emissions Energy Ecosystem”.

That commitment includes not only plug-in cars, but utility vehicles, buses, solar PV, renewable storage and light electric monorail systems (note the model held by DiCaprio in the above photo).

“All over the world people are realizing that cars that run on fossil fuels are inefficient and a major threat to the planet. I am very pleased to be joining an effort to increase the number of clean vehicles on the road in China and beyond.” - DiCaprio on joining the BYD team

Through the first 6 months of the year In China, BYD held a 65% share of the plug-in market, and more than 11% of the global market, with a year-over-year growth rate of more than 100%.

“Mr. Leonardo DiCaprio has greatly inspired the world with his outstanding dedication to saving the planet’s ecological environment. As our brand ambassador in China, we are pleased to work with him in promoting public awareness of climate change through the use of new energy vehicles.” - BYD Brand and Public Relations General Manager Sherry Li

Details are still scarce on what the actor will be doing for BYD, but a statement from the company says that "DiCaprio will work closely with BYD throughout 2017 to highlight new developments and announcements in China regarding the company’s line of new energy vehicles."