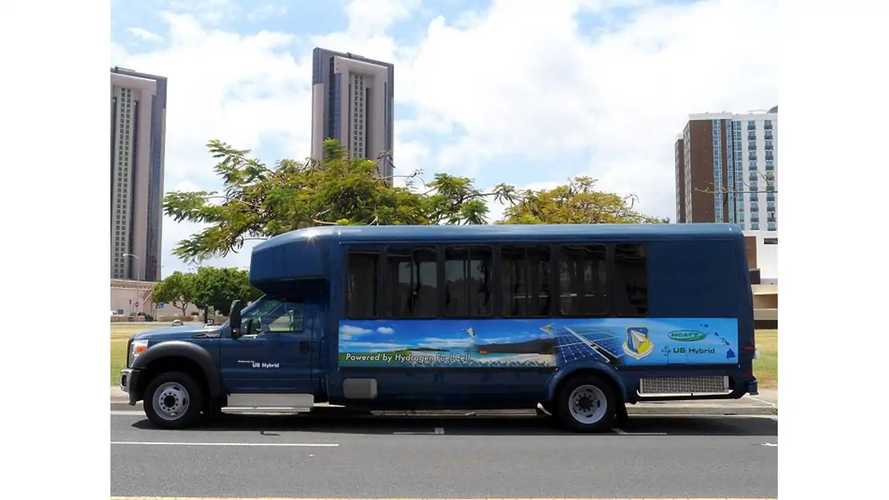 The County of Hawaii Mass Transit Agency bus service will be using this fuel cell plug-in shuttle bus for the big island of Hawaii.

This fuel cell shuttle bus will seat 25 passengers and is equipped with a 20kg hydrogen storage system and a 30kW fuel cell. Both the fuel cell and the 28 kWh lithium ion batteries will power many things like the 200 kW powertrain, air conditioning and auxiliary systems.

As you would typically find on many other plug-in hybrids and EVs, the batteries are recharged via regenerative braking and by plugging in (which is not typically true of hydrogen fuel cell vehicles).

Many individuals are showing interest and passion for this project.

“At this critical time in energy advancement, we are honored to have our hydrogen fuel cell vehicle technology selected by HNEI, the Hawaii County MTA and HCATT to lead the way for the adoption of zero emission mass transportation throughout the State of Hawaii.”

“I am proud of the state’s leadership role in providing the funding to introduce the first hydrogen fuel cell electric bus in support of public transportation in Hawaii. My vision is to leverage opportunities like this to introduce clean energy transportation services that utilize our own renewable energy resources to the benefit of our local economy, while helping the people of Hawaii get where they need to go.”

“This new fuel cell electric bus is the first tangible step in realizing our vision of transforming the County of Hawaii public bus system into one that is powered by our island’s incredible renewable energy resources. Instead of exporting our citizen’s hard-earned dollars offshore, we will be able to keep this money in our local economy creating new jobs and protecting us from the swings of the fossil fuel markets. We would also like to thank the Governor for investing in this project and allowing us to lead the way for the rest of the State of Hawaii.”

“This project demonstrates that Hawaii takes its role in leading the U.S. in clean transportation technology very seriously. We’ve already established ourselves as industry leaders with Department of Defense projects related to alternative fuel vehicles, and we are moving forward to make our counties and the state leaders in hydrogen fuel cell electric vehicles.”

“We look forward to evaluating the performance of this system and helping to develop ways to reduce the cost of the hydrogen infrastructure to the point where private industry can lead future hydrogen development.”

We should expect to see the "H2Ride" Fuel Cell Plug-In Shuttle Bus hit the road in early 2015.