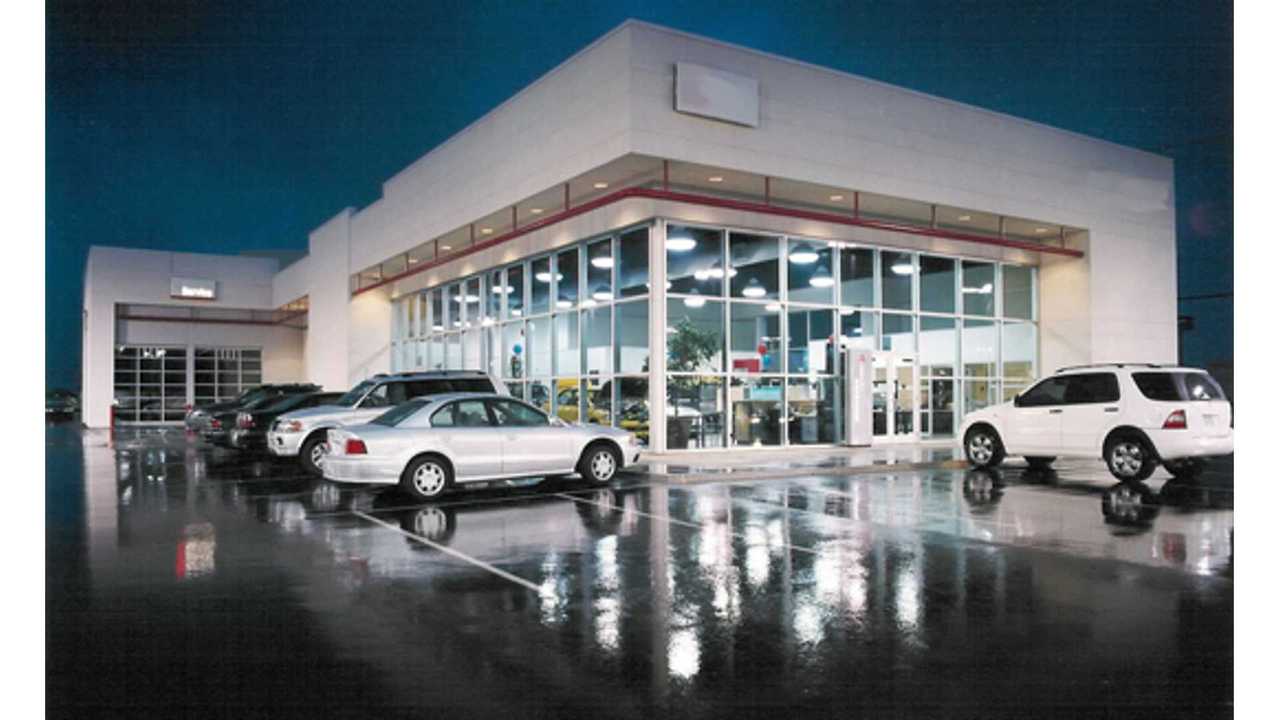 February 2013 was a rebound month of sorts, as January was generally considered to be a let down from the previous month's results, despite some strong year-over-year gains.

The story previously in January was supply and demand.  Either there was no supply (Nissan LEAF, Chevrolet Volt, Ford Energi products, Tesla Model S), or there was no demand thanks to the resetting of the "tax credit calendar" for the likes of the Toyota Prius plug-in.

The rising tide in February did not lift all boats as the Prius plug-in was still off and Ford didn't solve all their inventory issues, but most plug-ins rebounded decently during the month as inventories filled up and new models started to arrive at local dealerhips.

NOTE: This scorecard is published as soon as the first auto maker reports, and is populated/updated throughout the day as soon as more data is available.

Chevrolet Volt: Sales for February rebounded to 1,626 units, a 40% improvement over Janauary, and almost 60% up from a year ago's result.  (full recap here)

Previously, in the first month of 2013, GM posted its worst result in 12 months, as Chevrolet only sold 1,140 Volts.  Thankfully, this was not because America was growing weary of the longest-running production EV in the nation, but rather because an extended holiday shutdown in December (Dec 13th to Jan 2nd), seriously affected inventories entering 2013.

Sources inside GM said this week that the company plans on selling 36,000 Volt-based vehicles worldwide in 2013.  We figure 30,000 of those would have to come from the United States for the automaker to achieve their target..

That can't be the excuse going forward however, as GM has now ramped up their Hamtramck facility production facility  and churned out almost 3,000 units (2,949) in January and another 3,298 in February.

While not a huge number, this was a win of sorts for Nissan.  (Read the full February Nissan LEAF sales report here)

Taken at face value, 653 plug-ins would normally be considered a disastrous month for the Japanese automaker.  However, considering Nissan only had about 350 of the outgoing 2012 LEAFs remaining to sell entering the month, being able to sell more than that amount means 2013 LEAFs have not only started to arrive at dealerships, but they already getting into customer's hands.

A Nissan corporate spokesperson says that only 30 model year 2012 LEAFs still remain in the automaker's inventory;  which means about 330-od '13s were sold during the month.  Also of interest; the bulk of the new 2013 production is currently headed to California and the West Coast to fill the inventory of the largest market for plug in vehicles.

Nissan expects dealer inventories to start to fill up by month's end, with things getting back to normal sometime in April.  Look For March's sales results to be comfortably into the 4 digits.

Tesla Model S: Tesla does not give out exact monthly sales...but they do give a lot of updates, and consumers fanatically track their progress, so we can make a pretty accurate guess.  That, and they just had a quarterly report made public this month.

Last year, Tesla sold 2,400 electric sedans in the last 3 months of the year, and 2,650 for the year in total.  A result that missed the company's earlier prediction of selling 2,500 to 3,000 for the fourth quarter alone, and 2,750-3,250 for the year...but almost bang-on to our earlier monthly estimates for the company. (back-pats all around)

Tesla estimates that they can sell 4,500 units in Q1, but we figure they sold about 1,200 in January, thanks to a  week's production shutdown in January and some iffy selling practices in December that stole sales from 2013.

For February, we can now do basic math on a 28 day fiscal month, and a 400/week production rate (according to Tesla) and say that they probably sold about 1,400 of their 85kWh and 60 kWh Model S sedans in February.

Which really doesn't matter, because there is virtually no sales, no inventory, and nothing has been built since July.

The company is currently being 'managed' by the Huron Consulting Group out of Chicago until/if they can convince one of three Chinese automakers to buy the company out.

Still, if we must guess, we will use our handy InsideEVs calculator to do the complicated task of subtract.  Fisker had about 120 Karmas at dealers across the US going into February, and the ended the month about 107.  So lets call February, oh...13 Karmas sold.

For March, Ford is planning on having a big media launch in March in San Francisco, Los Angeles and DC to kick off sales.

The Fusion Energi basically offers the same package as the C-Max Energi, but in a larger sedan package.  The third plug-in to be offered from Ford has just been rated by the EPA at a combined 100 MPGe (92 MPGe highway, 108 MPGs city), and has an all-electric range of 21 miles.

Unlike the C-Max Energi, the Fusion Energi has been priced in-line (and above) the other 5 Fusion trim levels in the model lineup, so as not to 'steal' sales from itself. This has resulted in a starting MSRP of $39,495, which we feel is a bit steep.

Toyota Prius Plug-In: Toyota had a bit of a head-scratcher in February, with only 693 plug-ins sold,  a result that almost matches Toyota's worst effort to date (688 were sold last July)

The Prius plug-in finished 2012 as the second best seller in the segment, with 12,750 units sold, but we now question whether Toyota can put up enough of a fight to hold that position against the likes of the new 2013 LEAF, and a similar (but longer ranged) Ford C-Max Energi.

While two month's worth of results are still a very small sample size, we may be seeing the effect of  increased plug-in competition taking its toll on the plug-in Prius.

February results for the C-Max Energi are nearly identical to the numbers posted in January.  Ford reports that 334 C-Max Energis were sold in the US in February.

Ford entered January with less than 175 C-Max Energis on dealership lots, and it really showed up in the sales numbers, as only 338 units were sold.  Current inventories at February's end are nearly four times January at nearly 600 cars.

Sales of the Honda Fit EV broke into double digits with 15 units sold in February 2013.

Although the Fit EV is purely a compliance play for Honda to satisfy CARB, they have still built (and need to sell) 1,100 of the 82 mile EV.  At the current selling rate of 14 per month, it is going to take Honda 6.5 years in total to move all their cars.  We think it might be a touch hard selling 2013 model year cars in 2020.

To rectify this inventory/selling disaster, Honda has expanded their selling area to now include more than just California and Oregon, as the company announced sales of the Fit EV would now be available in certain areas of Massachusetts, Connecticut, Maryland, New York, and New Jersey.   The Honda Fit EV is a lease only proposition, offered at $389/month, but we feel the pricing is not as out of touch as it sounds, as their is no down payment and the pricing includes some insurance coverages.

Ford Focus Electric:  NO DATA TO REPORT YET

In January, sales of Ford's 76 mile, pure electric vehicle were halved to just 81 units, and Ford is not expecting 2013 sales of the model to improve by very much overall, despite a tripling of the dealership base that is able to sell the plug-in car.

Toyota RAV4 EV:  Despite some huge incentives in February, only 54 plug-in SUVs were sold during the month for Toyota.  (25 were sold in January)

Unlike with the Prius plug-in, Toyota has a bit of a problem getting anyone to consider buying its Tesla-sourced electric conversion of the RAV4.

In an attempt to restart sales, Toyota is currently offering $10,000 off the RAV4 EV, with 0% financing, which means customers in California can save a total of $20,000 of the Toyota's MSRP price of $49,800 with incentives included in the mix.  How can this 100+ mile SUV not be selling with this kind of deal?

Almost as amazing as February's result was January, when 257 i-MiEVs were sold (their best result at the time) thanks mostly to some heavy discounting (as low as a $69/month lease).

Mitsubishi's best result last year was only 85 cars sold in a month (May of 2012), so 2013 results are a significant turn-around for the little Japanese EV.  The people have spoken, and at a lease price under $100 per month, they will buy definitely buy the tiny Japanese EV.

Still, we can't help but notice there is still no 2013 model year Mitsubishi i-MiEVs yet inside the United States while Mitsu tries to burn through the excess 2012 inventories. (And that is despite being only about 6 months away from the 2014s)

Honda Accord Plug-In:  Even though Honda said their plug-in Accord went on sale on January 15th, there really wasn't any inventory, and only two were sold.

We still are not seeing cars at the dealership level, so February is a virtual wash-out as well, but somehow Honda did sell 17 units in February, nearly 9 times the 2 sold in January...a 850% increase if you like to talk in percentages.

First set to arrive in Canada this month, and next month in the US, the Smart ForTwo Electric Drive sets a couple new benchmarks in the electric vehicle segment.

The 2-seat Smart electric car gets 68 miles of range from a 17.6 kwh battery.

And before you say that might not be enough range for you; if you live in the city, you will easily destroy that range benchmark, as the Smart EV is a virtual brick in the wind tunnel skewing the range rating much lower than what can be expected driving in town.  Conversely, that also makes the Smart EV a terrible choice if you drive on the highway a lot.   City MPGe is rated at 122, while highway fuel efficiency falls all the way to 93 MPGe.

Of note:  Smart did record 2 Fortwo ED sales in January of 2013, but these were not the 3rd generational Smart EDs (2013 models) that are destined for public consumption in the spring of this year, but reportedly from an earlier 2nd generation offering.