Will the Mustang Mach-E struggle to compete with the Model 3 (And Y)?

Despite some of its struggles and faults, Tesla is tried-and-true when it comes to EVs, and the Model 3 has been on the market for some time, not to mention the Model Y electric crossover, which came to market on our shores in March 2020. The Ford Mustang Mach-E hasn't yet been launched in the U.S., and Ford doesn't yet have a charging network. How will this play out?

UK-based EV-centric YouTube channel Electrifying got its hands on a Ford Mustang Mach-E and a Tesla Model 3. Why not a Model Y? Well, while it makes more sense to compare the Mach-E to the Model Y, you can't yet get Tesla's midsize electric crossover in the UK. Regardless, since the Model 3 is so much like the Model Y, this comparison makes perfect sense.

Electrifying calls the Mustang Mach-E "one of 2021's hottest new electric cars." It goes on to say the electric Mustang crossover is the "first proper, mass-market electric Ford on sale in the UK, but more than that it's a fashionable SUV and wears Ford's famous pony badge."

The publication also says that even though the Mach-E wears the Mustang name and seems to be very well-received, it may struggle to compete with Tesla. Many people in the market for a performance EV have already bought a Tesla, or are planning on buying one. In addition, Tesla is the only EV maker with its own, proprietary fast-charging network. In fact, the Supercharger Network allows quick public charging at strategically located stations across the globe.

Electrifying asks, "If you're in the market for a new electric car with a long range, premium interior and bags of kerb appeal, should you go for the Ford or the Tesla?" 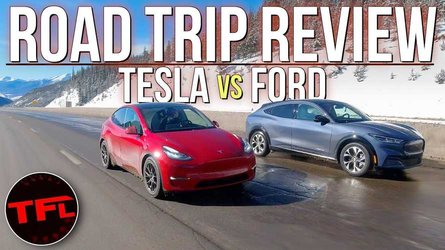 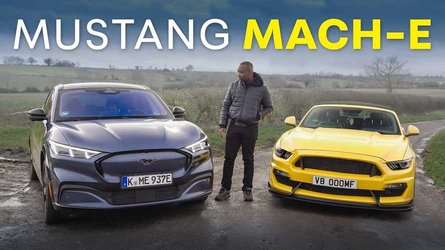 How Much Ford Mustang Is There In The Mach-E Electric Crossover?

The episode's hosts Nicki Shields and Tom Ford duke it out for your EV education, mixed with a bit of fun. Check out the video and let us know which EV you're planning to buy.