When it comes to EV sales in 2022, Italy struggles to mirror most of its European neighbors.

2022 has not been a pleasant journey for plug-in vehicles in Italy. Following years of exponential growth, the spark of the EV revolution seems to have gone cold in one of the arguably most important auto markets – by volume and automotive history – in Europe and the world.

Official statistics through the first three quarters of this year (via Unrae) portray a confusing picture, with one main certainty: a declining BEV market. Overall car sales through Q1-Q3 2022 were marked by an ongoing contraction from the 2021 post-Covid rebound levels. About 990,000 car registrations were recorded, down almost 16% Year-On-Year (YoY) from almost 1,180,000 in Q1-Q3 ’21.

Traditional petrol and diesel powertrains were hit hardest: down by about a quarter in absolute sales numbers, they stopped at 27.8% and 20.3% market share respectively, down from 30.5% and 23.5%. Plugless hybrid sales stayed flat YoY, which meant an increase in market share from 28.1% to 33.8% in this deflated market.

The switch to electrified ICE options has now been confirmed quarter after quarter, as legacy carmakers simply replace most of their high-volume ICE models with very lightly electrified options. We can only expect this shift to continue in the mid-term, irrespective of government policies, with a 40% market share in sight for next year. But what about plug-ins?

A prolonged holding phase in the wait for incentives through the first five months of 2022 cut the legs to a market in need of fiscal stability. The later, long-promised launch of revamped government incentives was mired by further promises for amendments, which did little to stabilize BEV sales on a renewed growth trajectory. But it is also a simple matter of cost that is hampering the Italian BEV market, focused on small models that are still far from the price range of the average car buyer. Italy’s underwhelming economic conditions, which are leading to a likely recession in 2023, made it all worse. 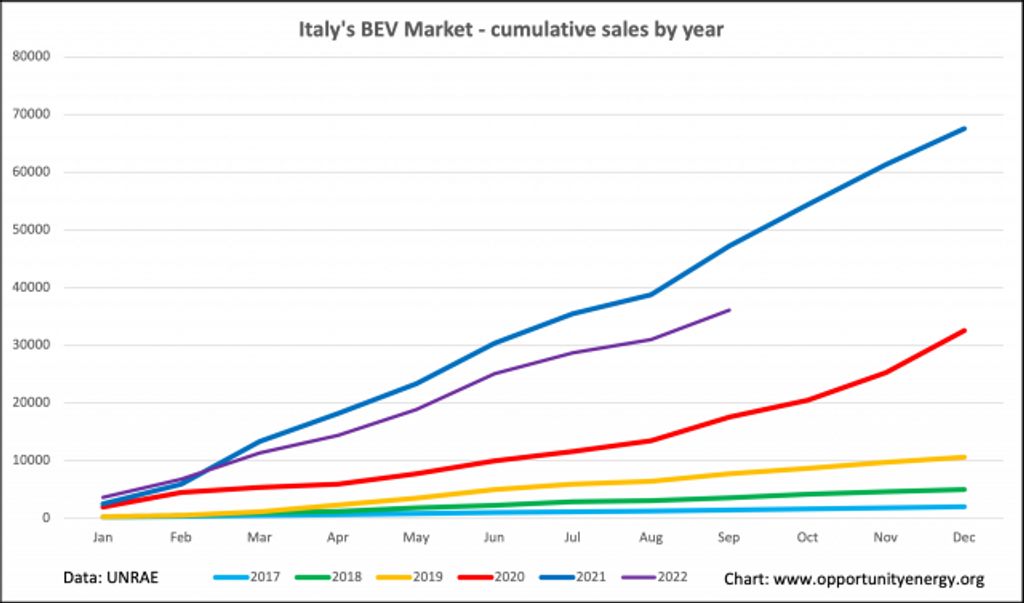 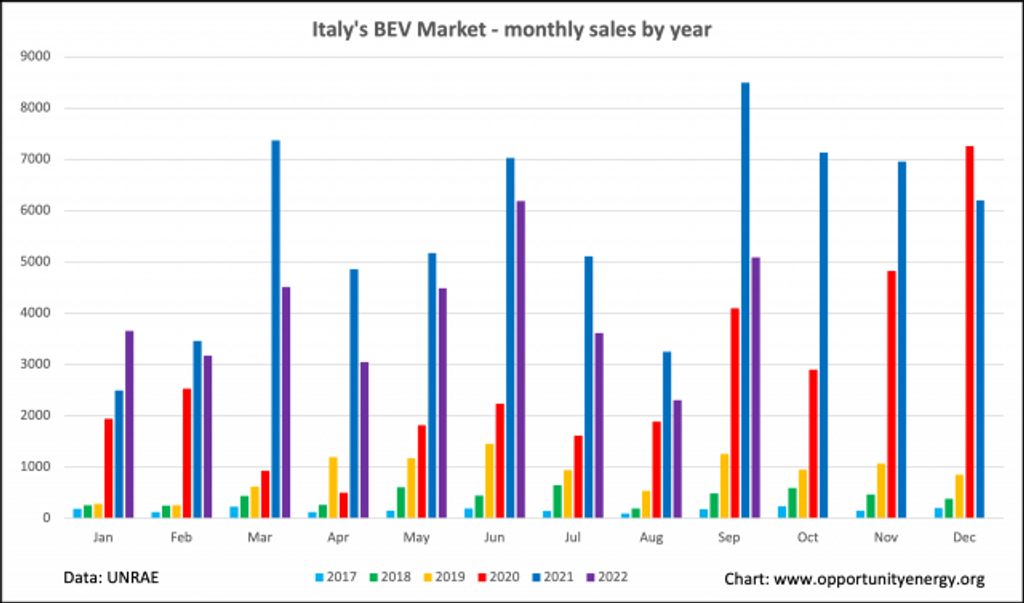 A slightly different path was taken by plug-in hybrids, which managed to stay afloat despite the worsening car market cycle. With almost 50,000 units, PHEVs limited their YoY decline to a -6.6% (from just over 53,000 units in 2021). This in turn meant an increase in market share, as most other powertrains suffered major losses. At 5%, PHEVs in fact increased their share YoY from 4.5% twelve months ago.

The PHEV push by many automakers is clearly having an impact, as many Italian customers are still unimpressed by the electric range of available models and prefer a less radical step into electric mobility. Thanks to the steady performance of plug-in hybrids, overall plug-in registrations reached 8.7% market share by the end of Q3, a slight improvement over the 8.5% figure recorded a year prior by the sum of BEVs and PHEVs. 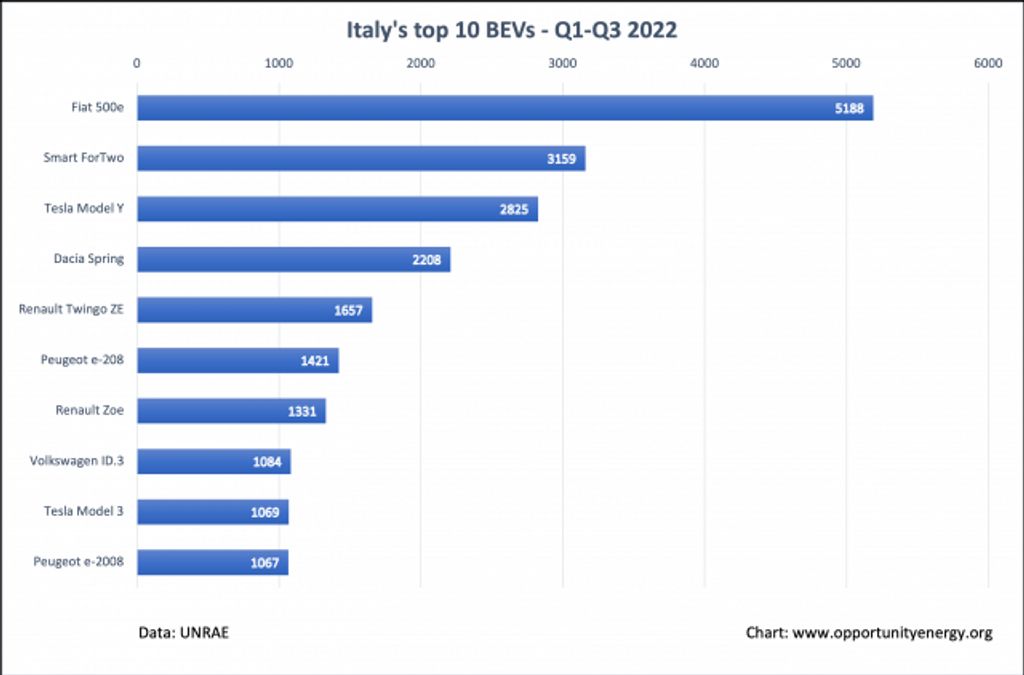 Ongoing queen since its debut, the Fiat 500e scored 5,188 registrations in Q3, far ahead of any other BEV models for sale. The main difference with past performances is that this represented a 34% decline YoY, a harsh comparison. The runner-up at a wide distance, the evergreen Smart ForTwo followed with 3,159 units, itself affected by an over 30% YoY decline.

The Tesla Model Y managed to grab third place, closing the podium with 2,825 registrations. This was a big feat for such an outsized model in a market of city cars, made all the more surprising by the overtaking of Dacia Spring, which was on the podium at the end of the first half of 2022, and now forced out into the fourth position by uneven deliveries in a market thirsty for low-cost models.

More A- and B-segment BEVs followed, with just a touch of upmarket models, with the VW ID.3 in eighth position, far from its true potential, and the unfailing Tesla Model 3, penalized throughout the year for a heavily increased price tag (due to imports?) and internal competition by its sibling Model Y, produced more “locally” in Germany.

The first three quarters of 2022 showed numbers far from the kind of statistics one would have hoped and expected for the Italian EV arena, but the many headwinds, local and global, hampered a market that promised to break new barriers. It's hard to predict any redemption in the coming months, unless unlikely, major political and economic shifts drive EVs out of this downturn.