There is a chance for over 3,000 units per month in the second quarter.

Rivian yesterday announced its financial results during the first quarter of 2022, as well as the production rate and the number of vehicle preorders.

While the net loss of $1.6 billion is huge, the company says that in big part, it's related to the low volume production of the three first models (R1T pickup, R1S SUV and EDV 700 vans for Amazon), which are still in the early ramp-up phase.

In Q1 2022, Rivian produced 2,553 EVs and delivered 1,227, while as of May 9, its cumulative production reached about 5,000 units. It means that the production rate improved, and in the first part of the second quarter, Rivian already produced about 1,400 units.

If nothing changes, there should be no issue exceeding 3,000 units in Q2 (or over 1,000 per month), despite various challenges:

"Supply chain continues to be the bottleneck of our production. This challenge has continued across a small handful of technical components such as semiconductors, as well as a few non-semiconductor components. Since March 31, 2022, we have been forced to stop production for longer periods than anticipated, resulting in approximately a quarter of the planned production time being lost due to supplier constraints."

Rivian reaffirmed its 2022 annual production target of 25,000 units (over 2,000 per month on average), which would most likely require triple the rate in the second half of the year (to over 3,000 units per month. 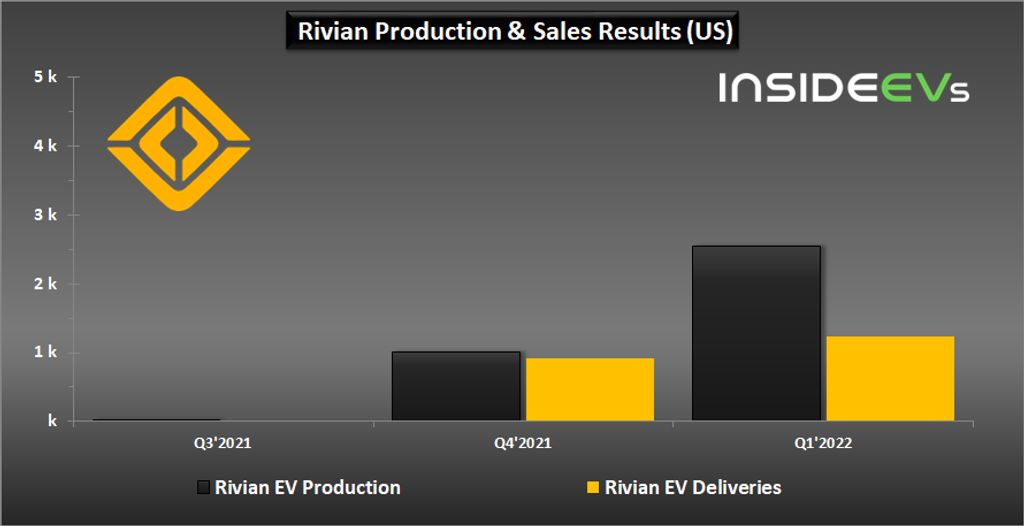 Preorders increased to over 90,000

It means that the demand for Rivian R1T/R1S is significantly higher than production even after the price increase - over 10,000 preorders were placed since updating pricing in March (we guess that some were canceled due to controversy). The average vehicle price of those 10,000 new preorders is $93,000.

Rivian says that soon will upgrade its reservation system:

"Soon we will be launching an updated reservation system for new customers that separates the reservation and configuration steps. New customers will still be able to browse through options; however, the ability to save a specific configuration will not happen until closer to a customer’s build slot. This change ensures that when a build is configured, the customer is choosing from the latest features, packages, and pricing."