The first to arrive will be a VW MEB-based crossover in 2023, followed by a sportier variant and the Puma EV in 2024.

The announcement comes not long after Ford has created a new global business unit—Ford Model e—focused on electric and connected vehicles. Together with Ford Pro, the unit dedicated to commercial vehicles, these two business units will define Ford's future in Europe.

Cutting straight to the chase, Ford will have four battery-powered EVs in its European lineup by 2024: the Puma, a medium-sized crossover, a sport crossover, and the existing Mustang Mach-E.

Starting in 2023, Ford will begin production of an all-new EV, a medium-sized crossover, followed by a second EV in 2024, a sport crossover. Both will be made at the plant in Cologne, Germany. Factoring in information from a VW press release that was also issued today, both Ford crossovers will be based on Volkswagen's MEB platform.

In addition, Ford's best-selling passenger vehicle in Europe, the Puma subcompact crossover, will gain an all-electric version that will be made in Craiova, Romania, starting in 2024. Interestingly, the plant will be taken over by Ford Otosan, the joint venture between Ford Motor Company and Turkey's Koç Holding.

Back to the first EV to come out of the Ford Cologne Electrification Centre, it will be a five-seat, medium-sized crossover, but seeing as Ford describes the Puma as a compact crossover (when it's actually a subcompact), the EV that will be made in Cologne from 2023 will likely be a compact model.

The only thing Ford is willing to say about it at the moment is that it will have a range of 500 kilometers (310 miles), with the design and model name to be revealed later in 2022. The second EV to be made in Germany is described as a sports crossover, which likely means that it will be a coupe-styled version of the former. These crossovers will probably be the Blue Oval's variants of the ID.4 and ID.5 GTX.

The two electric crossovers are projected to increase Ford Cologne's EV production to 1.2 million vehicles over a six-year timeframe. Investment in the new electric passenger vehicles to be built in Cologne is expected to amount to $2 billion, including a new battery assembly facility scheduled to start operations in 2024.

As for the all-electric commercial vehicles, Ford's Transit lineup will include four new electric models: the all-new Transit Custom one-tonne van and Tourneo Custom MPV in 2023 (both made in Koçaeli, Turkey), and the smaller, next-generation Transit Courier van and Tourneo Courier MPV in 2024 (both made in Craiova, Romania). In addition to these models, the E-Transit full-size electric van will launch in Europe in the second quarter of 2022. 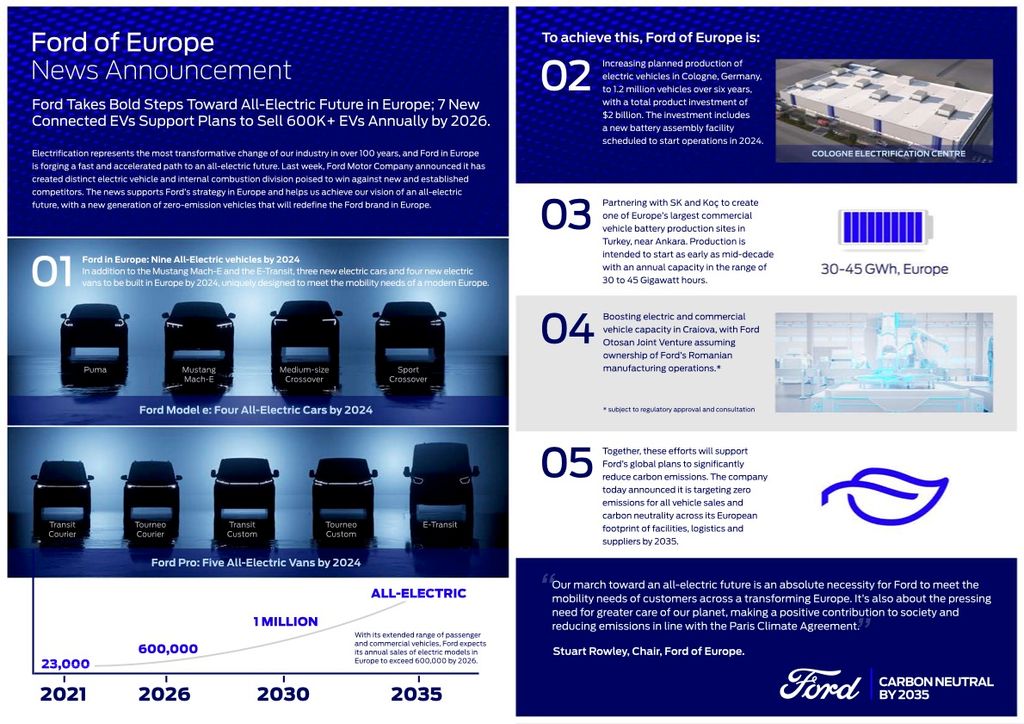