The EPA range and efficiency ratings for the two, top-of-the-line Ford Mustang Mach-E versions - GT and GT Performance - were recently listed by the EPA.

The range results have already been known since June, but now we have additional data, which confirms that the GT is the least efficient Mach-E due to its focus on performance. The drop in range and efficiency isn't big though. 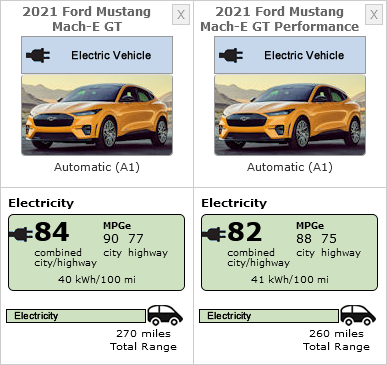 The Ford Mustang Mach-E GT Performance has about 10 miles less range than the GT and even lower efficiency.

The interesting thing is that EPA documents reveal a voluntarily lowered combined range from 261 miles to 260 miles.