It's an epic display of old powertrain tech versus new.

What happens when you pit the Tesla Model S against the Mercedes S-Class in a drag race? You may already be able to guess the results, but that doesn't mean this isn't an interesting matchup. The Model S and S-Class are essentially both top dogs in the same segment for a number of reasons, though one is electric and the other runs on gasoline.

If you asked someone to name the most luxurious car they're aware of, many might mention the opulent Mercedes-Benz S-Class. Few would likely name the Tesla Model S, though the car is premium inside, striking on the outside, and one of the best-performing large family sedans ever produced.

Clearly, Tesla's and Mercedes' priorities are very different. Tesla could easily spend more time and money making the Model S – and all of its vehicles for that matter – much more luxurious. However, they'd also be much more expensive. Instead, Tesla focuses on range, performance, and technology. While we don't think Tesla needs to make its cars more luxurious, it should continue to work on consistency related to build quality.

Meanwhile, while Mercedes is slowly creeping into electrification, the brand is still primarily focused on gas cars with ultra-luxurious interiors, high-end materials, and top-notch fit and finish.

That said, carwow got its hands on a Tesla Model S 100D and a Mercedes S 500 for comparison. Keep in mind, this isn't the new Model S Plaid, which is the world's quickest car ever produced. In fact, it's not even the "P" 100D, which is the Performance version. Instead, it's the 100D that prioritizes range over performance. In the current Tesla language, this would be like the Long Range rather than the "Plaid" or "Performance" model.

We should also note that while the competing Mercedes is the "new" S-Class, according to carwow, the brand will be bringing the all-electric EQS to market, which is essentially an all-electric S-Class. We'll have to wait and see how the Plaid and the EQS stack up, and, of course, we'd want to see Mercedes-AMG's top performance version of the electric sedan.

For now, we've got the Model S 100D, which carwow says has dual-motor all-wheel drive and 600 horsepower. The S-Class S 500 uses a turbocharged 3.0-liter six-cylinder to crank out 435 horsepower.

Needless to say, the Model S makes the S-Class look slow. It almost seems as if the Mercedes driver isn't even trying, though we know that is often how it appears when most gas-powered production cars race Tesla's flagship sedan. 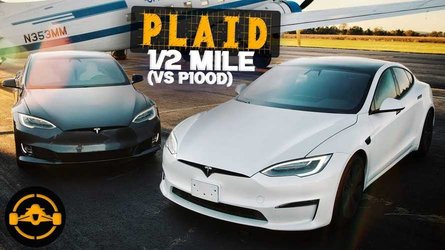 Tesla Model S Plaid Acceleration “Too Fast For Its Own Good” 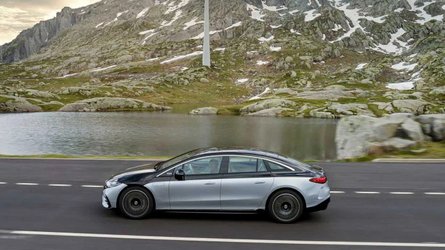 Mercedes Really Wants The EQS To Succeed In North America

What are your thoughts about the upcoming Mercedes EQS? Can it succeed in North America? Leave us a comment below.