In one of their many journeys seeking out notable Tesla and EV news, The Kilowatts visited Laguna Seca Raceway. We provided an earlier report that showed The Kilowatts at the track, with glimpses of several Tesla vehicles. However, they said they arrived too late to see what had happened. The best guess was Model S Plaid or Plaid+ testing, as well as a potential attempt to set a new record.

In their latest share, The Kilowatts provide more details about their visit. They claim they saw two new refreshed Model S sedans, and they point out that the cars might be Plaid or Plaid+ models, though there's no way to be sure. The cars were, however, testing at high speeds.

The Kilowatts were fortunate to take video of several quick laps. They put together a raw video of the two quickest laps for each of the Model S vehicles. The times are unconfirmed at this point, but according to The Kilowatts, the best lap time came in at an impressive 1:29.9. We'll have to wait and see if Tesla or the track officially confirm the times.

Interestingly, The Kilowatts also point out that they captured some images of a "never-before-seen retractable/adjustable aero wing built into the trunk lid of the red test vehicle."

For reference, according to Teslarati, the McLaren Senna has the fastest official lap time at the popular raceway, at 1:27.62. The Porsche 911 GT2 RS pulled it off with a time of 1:28.30. So, if the Model S Plaid did hit 1:29.9, and it becomes official, it won't hold the overall record, but it may be in the top five of all time for a production car, and also hold the record for an electric car. 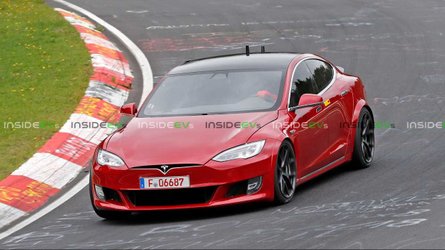 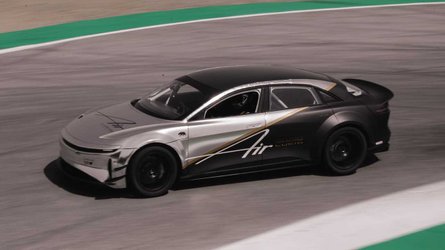