Germany's Equivalent To NHTSA Has Tesla MCUv1 Under Scrutiny Too

Will KBA follow NHTSA and demand a recall for the component?

NHTSA asked Tesla to recall 158,000 cars that use the MCUv1 in the US. Yet, about 159,000 Model S and Model X units received the computer. The difference refers to EVs sold abroad. At least one safety watchdog abroad took what NHTSA said seriously and is also investigating the MCUv1: Germany’s KBA, or Kraftfahrt-Bundesamt.

According to Bild am Sonntag, Germany’s Federal Motor Transport Authority would be in contact with NHTSA and would also have asked Tesla for similar documentation and data to determine if the issue these computers present will demand a recall in Germany or not.

If that happens, it is very likely that the Model S and Model X sold in other countries in Europe will also have recalls. Although KBA cannot make such action mandatory outside Germany, it is responsible for certifications for many automakers, perhaps also for Tesla. If that is the case, other European authorities will have any KBA decision in high regard.

Tesla did not reply when the German newspaper asked for more information, but its documents to the American agency confirm the company is aware of the issue. Tesla’s defense to NHTSA was that it does not affect safety.

The NHTSA letter states the MCUv1 issue causes “loss of rearview/backup camera,” “loss of HVAC (defogging and defrosting) setting controls (if the HVAC status was OFF status prior to failure),” and “affects the Autopilot advanced driver assistance system (ADAS) and turn signal functionality due to the possible loss of audible chimes, driver sensing, and alerts associated with these vehicle functions.” 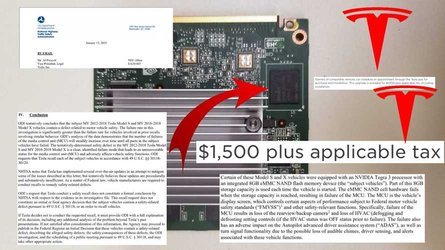 Tesla Now Charges $1,500 For Upgrade NHTSA Asked To Be A Recall 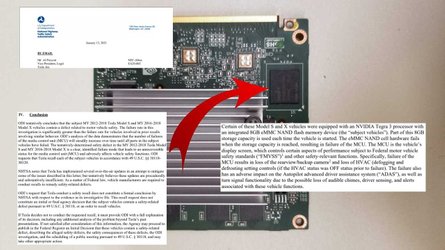 The agency mentions multiple recalls involving each of these problems, which means it will not buy the excuse that the MCUv1 issue will not represent a hazard. Tesla has still not replied to NHTSA’s demand apart from lowering the price for the MCUv2 upgrade by $1,000 – to $1,500.