A gradual decrease of sales til they hit the bottom.

Norway has recently set another milestone in its transition to 100% electric cars, as two-thirds of the market shifted to BEVs in December 2020.

For the first time in history, we can see a market where sales of conventional cars rapidly declined - from more than two-thirds about five years ago, to a single-digit share last month. It's truly amazing that only 2.7% of new passenger cars were gasoline cars, and 4.8% diesel - a total of 7.5%. Even when adding another 5.4% for conventional hybrids (non-rechargeable), it's just 12.9%.

Norway is a specific country, with its wealth, EV incentives, ICE car taxes, and focus on the environment. For the rest of the world, it might be seen as a laboratory to show how the end of internal combustion engine cars will look like.

All that we have to do is to insert a proper time scale for other markets. It will be different in different places, but most of the market reasonably could be where Norway is today in less than 20 years. Frankly, some might be there in less than 10 years. 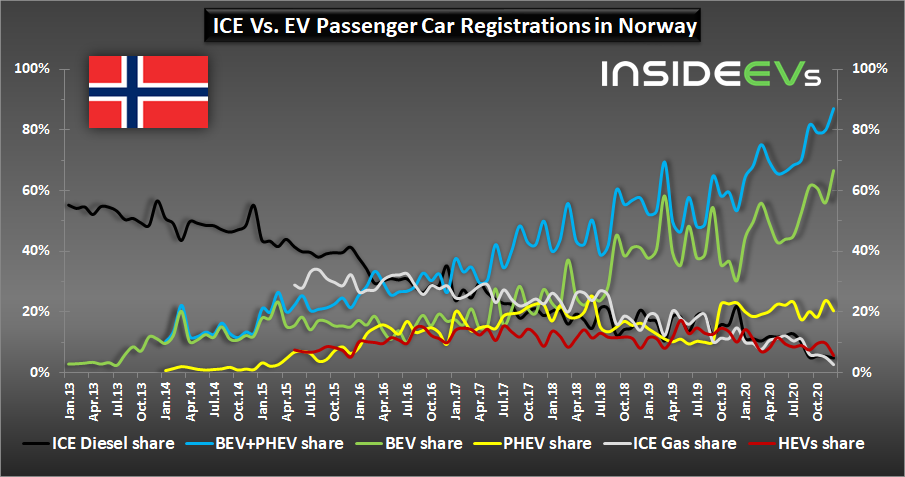 Norway, with a population of a few million people, is now approaching a huge milestone of 500,000 plug-in electric cars on the road, which should be achieved within months.

The cumulative passenger BEV sales already are at around 300,000, PHEVs at 135,000, and additional 50,000 BEVs were imported as used. With 100,000+ sales per year, the overall fleet is quickly transforming to quiet, clean, and electrifying.

If you wonder which EVs are the most popular on the road, well, here is the top 5:

Soon, the ratings will change, as new BEVs are quickly raising, including Audi e-tron (the top in 2020) and Volkswagen ID.3 (one of the top in the last couple of months).