With record sales of multiple models, and strong general demand for plug-ins, the market is booming.

September was an exceptional month for passenger plug-in electric car sales in Europe, even taking into consideration the strong growth in previous months.

Sales went through the roof, reaching a new all-time record number of registrations - 160,059 (up 166% year-over-year)! The market share hit an outstanding 12%!

Most of the sales were BEVs, but PHEVs are growing quicker:

After nine months, more than 772,000 new plug-in passenger cars were registered in Europe, which is 9% of the total volume (4.9% falls on BEVs)!

With three months to go, we should see a million for the very first time in a calendar year! Actually, it will be much more than a million.

Volume deliveries of the Tesla Model 3 (16,125) allowed it to take the first place for the month and set the best result so far this year.

The long-awaited Volkswagen ID.3 was third (8,571) with a very good result in its first month of customer deliveries, although the 10,000 mark was not crossed.

There are tons of other plug-in models that set their own personal best/or the best this year results in September, as everything rechargeable seems to be selling pretty well. 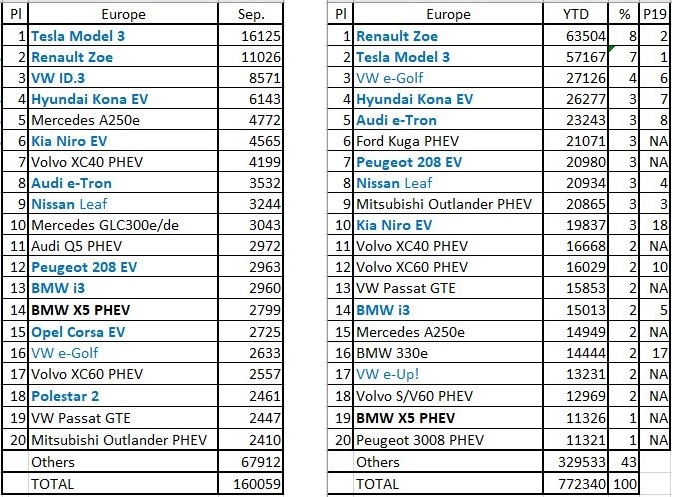