Elon Musk: How About A SpaceX-Edition Tesla Model 3? 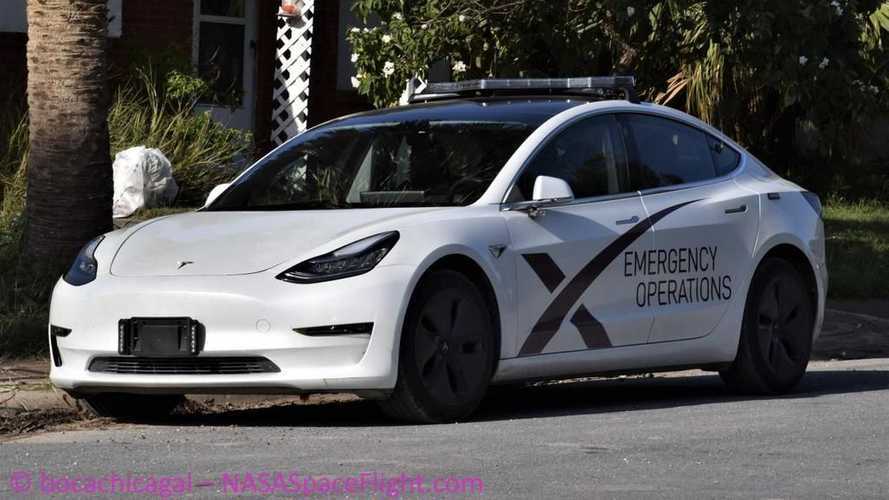 A mysterious white Tesla Model 3 is performing services as an ‘Emergency Operations’ vehicle for SpaceX.

In 2018, Elon Musk's original Tesla Roadster served as payload during the landmark SpaceX Falcon Heavy test flight. Musk even promised a special SpaceX option package for the next-gen Roadster. But what about Tesla's flagship seller, the Model 3 — is there any cool SpaceX collab in the works?

Well... it turns out that a mysterious white Tesla Model 3 is performing services as an ‘Emergency Operations’ vehicle for SpaceX. The Model 3 has been spotted on several occasions and at a number of different SpaceX events.

There are many hidden (and not so hidden) synergies between SpaceX and Tesla. You probably saw SpaceX video footage of NASA astronauts Bob Behnken and Doug Hurley getting out of a Tesla Model X before their recent mission to the International Space Station. Tesla's Elon Musk has even been credited with helping to make NASA cool again.

Okay, let's get back to that mysterious SpaceX Model 3. Spy shots surfaced at the Boca Chica launch facility (courtesy of @BocaChicaGal) via a stunning photo of the same Model 3 with the SpaceX logo wrapped on the doors and equipped with the emergency vehicle lighting on the top.

The SpaceX-edition Model 3 was also spotted at a company recruitment event at their Boca Chica office. And, when the huge Starship SN2 tank was returning to the assembly area on a rolling lift, the SpaceX Model 3 can also be seen monitoring the situation at the back in a live video feed earlier this year.

Above: SN2 tank starts rolling at around ~17:00 and the Tesla Model 3 SpaceX Edition joins the scene at the same time (YouTube: SPadre)

Alright, I admit it. I'm absolutely fiending for one of these SpaceX Model 3s. Elon, forget the Roadster SpaceX package... we need a Model 3 SpaceX package!

NASA Is Becoming Cool Again Thanks To Elon Musk And SpaceX