As expected, after 12-months of decline (since June 2019 when incentives were lowered), plug-in electric car sales in China, finally noted year-over-year improvement.

In July, close to 95,000 passenger plug-in electric cars were sold, which is 48% more than a year ago, and the new highest level this year. Not bad, considering that the overall car market in China increased by "just" 9%.

The Tesla Model 3 remains the top-selling EV in China with 11,575 units in July and 59,140 YTD, however, a big-small newcomer emerged.

Wuling's Hong Guang MINI EV noted 7,348 sales in its first full month on the market, and considering over 50,000 orders, it may soon give Tesla a run for the top spot. 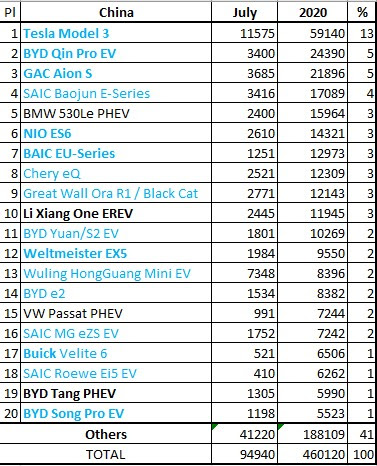