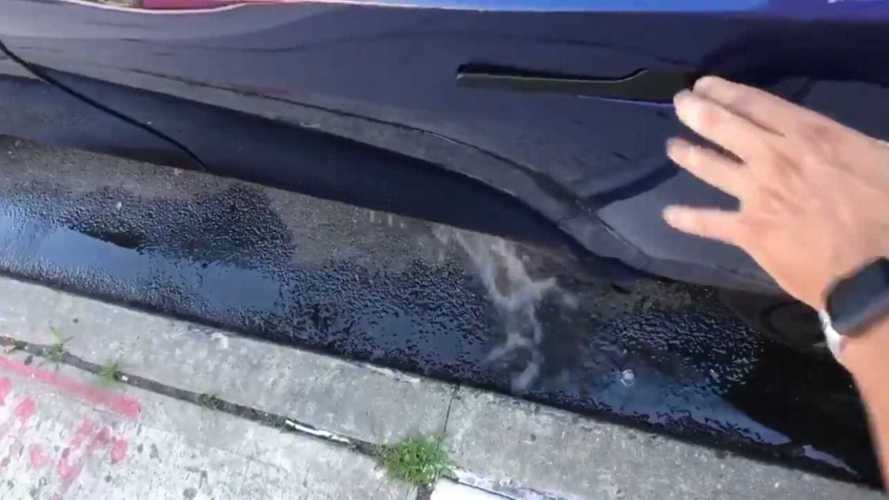 Were it a person, the blue electric CUV would be relieved after finally letting the water out.

On December 14, 2019, we presented to our readers a Tesla Model 3 taking a 5-minutes leak. A little later, we revealed the leak problem is relatively common and caused by water invading the structure of the trunk lid. The Model Y also accumulates water. The difference is that it must feel ashamed to leak like its older brother. Hector Rojas had to open the left rear door for it to release everything. Were it a person, it would be relieved.

Rojas’ tweet is from July 1, 2020, and he mentions he tried to give the car back to Tesla after only three days of use, but the company did not accept that. Check the tweet below.

Rojas also said there that the car had multiple issues. Some are similar to the problems we have already revealed. Some seem as new as the “holding water” situation. See what he said below.

We have tried to contact him in order to learn more about the issue. Is it only on the left rear door? Has Tesla already fixed it? What about the other problems Rojas reports? Unfortunately, we still did not hear back from him. If he gets in touch, we’ll have a second article detailing the entire situation.

Some Twitter users told Rojas that the problem is probably on the drain in the door seal, which would not be fitted appropriately. Rojas said he thinks the problem was that the car was build in a rush, hence all the issues it presents.

Is this a single case, or are there more Model Y holding water around? If you have a car that presents the same problem – or are aware of any – please get in touch through contact@insideevs.com or our Facebook page to let us know more about that.