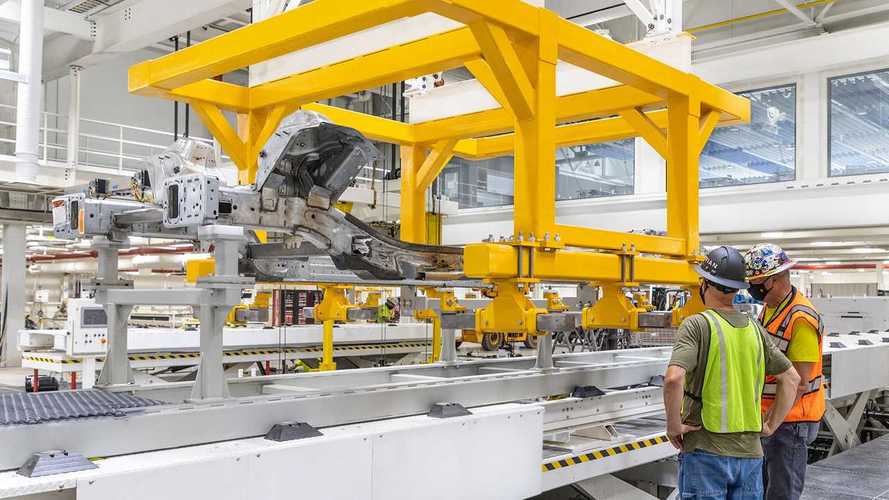 The pilot production line is up and running, though.

The Rivian R1T electric pickup initial delivery window appears to have been pushed back, along with the R1S SUV. And this isn't the first time. Back in April, the automaker confirmed its original window had understandably shifted due to the COVID-19 pandemic.

While the news – announced in a tweet (embedded below) – may be frustrating both for pre-order holders and company officials alike, the startup did tie up the disclosure in a silver lining. Apparently, its Normal, Illinois factory is now home to a functioning pilot production line and vehicles are being put together. It offered proof of that fact in a picture (above) showing a vehicle frame enmeshed in some sort of jig.

The Rivian journey to job one has been a bumpy one. Besides the obvious interruption to its operations due to the novel coronavirus, Lincoln dropped its plans for an SUV based on the R1S, and it was just hit with a lawsuit by Tesla, accusing it of stealing trade secrets and poaching employees.

Rivian gets good news and bad.

Rivian Raises $2.5 Billion In Effort To Compete With Tesla And Nikola

Despite this new delay and other setbacks, the company still has lots to smile about. It still has its agreement with Ford for a vehicle (probably an SUV) and that huge 100,000-vehicle commitment from Amazon. It also just raised an additional $2.5 billion to help it get its wheels rolling.

If it manages to stick to this updated schedule, it's still likely to have its pickup in customer's driveways ahead of the Tesla Cybertruck and GMC Hummer EV (which will also come in pickup truck form). Tesla just announced Austin would be the production location for its pickup and prep work for the first buildings just started – as shown in this video – and even with its speed is highly unlikely to have new product rolling out in less than a year.

In any case, we look forward to hearing more from Rivian as it begins rolling vehicles from this pilot production line. And, fingers crossed, maybe we'll even find ourselves behind the wheel of one before too long.