BMW 7 Series EV, Which Might Be Called i7, Spotted Under Camouflage 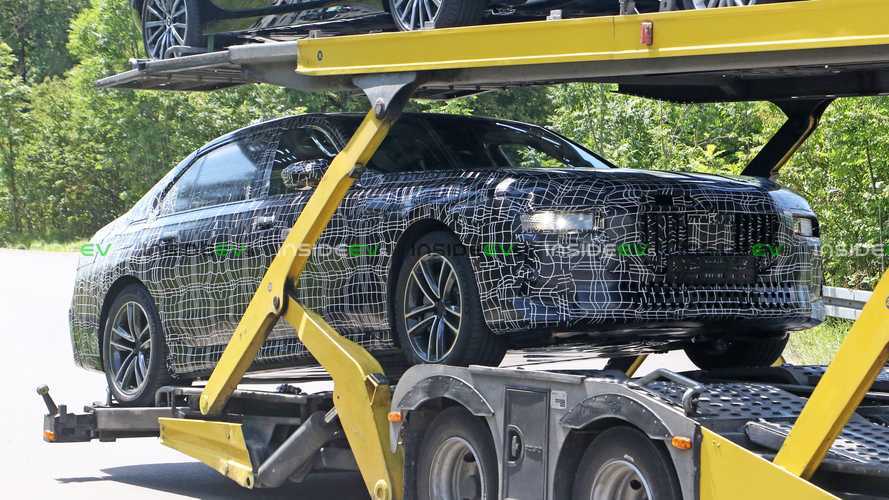 It will become Bavaria’s answer to the Mercedes-Benz EQS and the Jaguar XJ.

BMW is not investing in a bespoke flagship electric sedan, unlike Mercedes-Benz which is working on the EQS, a vehicle that’s totally different compared to the new soon-to-be-revealed S-Class. Bavaria’s answer to the EQS, and other bespoke luxury electric sedans like the upcoming Jaguar XJ, will just be a different version of the upcoming 7 Series, caught here by our spies under camouflage.

Regarding the next-gen 7 Series’ design, it appears to adopt an evolutionary approach, although it looks a bit more rounded and sculptural than the current car. It also appears to retain the oversized grille, which has sparked a lot of controversy; BMW is standing its ground on the big grille, so we’ll have to see if the finished product looks as bad it does on the current model.

More on the electric 7 Series

BMW: Next 7 Series To Include An All-Electric Version

The electric version of the future 7 Series, which may or may not be called i7, will differ from a visual standpoint compared to other models in the range. BMW may choose to differentiate it more than it’s done when it created the iX3 based on the X3 SUV; comparing the look of the i4 with that of the ICE versions of the new 4 Series gives you another idea of what BMW might do.

Our spies tell us that to them, the electric 7 has a bit more of a ‘ shark nose ‘ look to the front, but since this car doesn’t have the final front or rear lights on (the are most likely placeholders on this prototype), we can’t be sure. The EV version of the 7 Series will certainly have different front and rear fascias, but we just don’t know who different they’ll be.

What we can see in the spy photos is the front sensor array which is placed in a small recess above the grille, as well as cameras on the sides (rear-facing, located in the front fenders) and BMW has also integrated a camera into the shark fin aerial placed in the rear part of the roof.  The two rear-facing cameras may possibly be there to replace traditional mirrors, but since this is a prototype, it has both.

Oh, and it also has pop-out door handles that will sit flush with the body. These may or may not be exclusive to the electric 7, although we believe all versions of the car will get them.

Right now we don’t have any information on battery pack size, possible range or performance figures, but we do expect it to be a competitive model in all those areas (a range of around 400 miles seems about right. It is believed that the 7 Series EV, due out in 2022, could have up to 650 horsepower and act as the flagship model in the range, since the current V12-powered model won’t get a direct replacement.

BMW may offer more than one variant, though, with one or two motors, varying power levels and possibly different size battery packs too.