Sweden, the market that does not stop growing.

It seems that in terms of plug-in car sales, Sweden went through the COVID-19 with ease. In June, the number of registrations increased by 86% year-over-year to 6,391.

The plug-in car market share was 26%, and mostly it was plug-in hybrids - 19%, while all-electric cars took 7% market share.

Not many other markets were able to achieve such an uninterrupted string of growth in 2020:

In Sweden, plug-in hybrids from Volvo, Kia and Volkswagen dominate the plug-in segment.

Two all-electric cars - Tesla Model 3 (312) and Renault ZOE (299), completed the top 5 for the month. Those are also the highest classified BEVs year-to-date at #6 and #9 respectively. 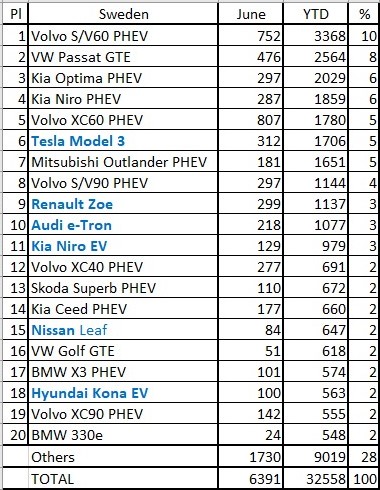