Addionics Proposes To Change Physics – Not Chemistry – To Improve Batteries 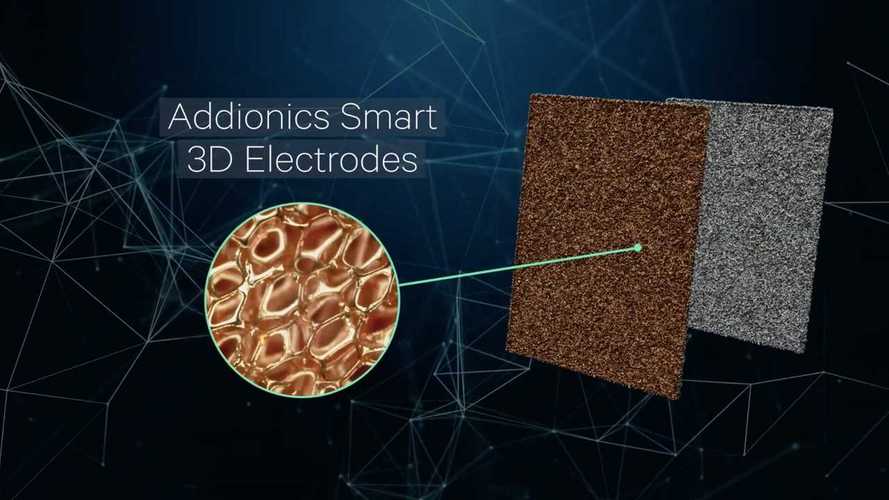 The Israeli startup bets on the race, not on the horse.

We are frequently writing about promising new chemistries for batteries. Cheaper and safer materials can make the adoption of clean transportation much faster. But an Israeli startup developed a fascinating approach to improving cells. Addionics bets on changing the dynamics of chemical reactions. In other words, it achieved its goals with physics rather than with chemistry.

What the company did was creating a porous surface for electrodes. It replaces the metal foils with a new structure that increases the surface of these components, and that has a direct effect on how the cells behave, as Moshiel Biton, Addionics CEO, told InsideEVs.

“Due to specifics of our electrodes, we have a considerably higher power density for thick electrodes due to unrestricted electrolyte transport across the whole multilayer electrode battery cell. Addionics creates battery electrodes by embedding battery active material inside 3D metal current collectors. By designing porous metal structures, we significantly improve contact area between battery material and current collectors and electrolyte transport across the whole porous structure thus enabling higher currents or having a lower internal resistance.”

Biton explains that thick electrodes pose some issues. Addionics can tackle them with its 3D electrodes manufacturing method.

“The higher the electrode thickness, the higher the energy density of the cell. Nonetheless, for thick electrodes (greater than 100 micrometers), the output current density decreases due to electrode tortuosity, ohmic and contact resistances, structural stability (e.g cracking and delamination), and so on. When we make our thick electrodes (higher energy), we embed them in relatively rigid 3D metal current collectors with defined porosity, contact area, pores size distribution, etc. By doing so, we are achieving higher operational currents (higher power). This is especially critical in conventional multilayer battery cells, where electrolyte transport is quite restricted thus limiting the output current.”

When you turn these technical explanations into daily business, they mean lithium-ion cells can have a 200 percent longer lifespan and a 50 percent faster-charging process.

“Addionics implemented a simple strategy for comparison: we fabricate conventional and 3DCC-based batteries using the same materials, electrolyte, cell size and format, and so on. Furthermore, we build electrodes with similar material loading (mAh/cm2) both for anode and cathode. Following the fabrication, the cells are tested using the same testing procedures. The increase of 200 percent lifetime and 50 percent improved charge time is not a claim but a statement corroborated by experimental results of these testing procedures based on the abovementioned comparison strategy.”

If that applies to electric cars, Biton believes he has good news to give us as well.

“In terms of range, this is something that is under testing at the moment – we believe to see at least 40 percent improvement by having emerging chemistries where the only solution to accommodate them is by 3D architecture.”

Considering many studies are now going after new components, such as silica, we asked Biton if Addionics used any such materials as the basis for creating these special porous electrodes.

“We are not changing the material composition. With the 3D electrodes, we used conventional materials. Addionics’ solution is taking known materials that already have a proven record in the battery space and fabricating them in a new geometry to improve battery performance.”

It makes perfect sense.  Any modification to the battery composition would imply a chemistry change. That is what happened with the carbon nanotubes CENS uses to achieve the same effect Addionics states it has attained with the 3D electrodes, as the company calls its creation.

“We are not focusing on improving the chemistry of battery materials or electrolytes. Instead, our main focus is on design, engineering, and fabrication of 3D current collectors with controlled porosity thickness, pores, and so on. As such, we use industry-accepted electrolytes for lithium-ion batteries containing linear and cyclic carbonates with LiPF6 salt and some additives like fluorinated carbonates. For cathode materials, Addionics employs state-of-the-art NMC811 material with only 10 percent of cobalt content.”

That does not mean the technology the company developed is restricted to Li-ion cells.

“Our solution already proved with different types of chemistries, also with a cobalt-free cathode as LFP. Any future material/anode/cathode/electrolyte/technology candidate is an opportunity for us, as it can be improved yet further by using Addionics’ solution. We are enabling smart structures in a cost-effective manner with our invention.”

“Cost-effective” is the name of the game, as Gilad Fisher reminds us. The Addionics’ director of business development and marketing says the company was created five years ago to try to develop solutions for some of the most significant battery issues, such as dendrite formation.

“The deal is to make a porous structure and change the physics of the materials. You can see light through it! We don’t bet on the horse, we bet on the race. Our method improves any battery chemistry. It is a cost-effective sustainable process that reduces waste and is compatible with existing battery factories.”

But how does it reduce dendrites? Biton sent us a study and told us what Addionics achieves in that respect but not precisely how.

“The 3D electrodes can mitigate the formation of dendrites and prevent the dendrites to penetrate the separator. We didn’t see any evidence of dendrites in our cells.”

Fisher told us the company is already discussing the use of its technology with battery manufacturers and OEMs but was not able to disclose which ones at this point. We hope to have news about any batteries with the Addionics technology as soon as it emerges. Just imagine what it could do for CATL’s 2-million-km cell.