Although it is not-conducting, silica is highly polar and that is good enough.

They are called Li-S, LSB, or only lithium-sulfur batteries. They hold as much promise as solid-state batteries – if not more – due to their potential for a 2,600 Wh/kg energy density. That is ten times what the best current Li-ion cells can offer. The issue is that scientists never managed to make LSBs endure more than a few cycles until now. Researchers from the Daegu Gyeongbuk Institute of Science and Technology achieved 2,000 cycles with their Li-S batteries with the help of silica. And the explanation is as fascinating as the results.

Silica is a cheap metal oxide that is not-conducting, which will make people wonder how it can be useful for the LSBs. It is because it is highly polar, attracting other polar molecules, including one of the most harmful for Li-S cells: lithium polysulfides (LiPS). When they dissolve, that implies in a sulfur loss. When they get to the anode, they can also harm the cell.

Carbon Nanospheres May Give Us High-Performance Lithium-Sulfur Batteries

OXIS Energy Lithium-Sulfur Batteries To Be Produced In Brazil

The silica is used to create a platelet ordered mesoporous structure called pOMS for short. It works as the cathode after it receives a conductive carbon-based agent. Being polar, it allows LiPS to form, but neither to dissolve nor to damage the anode. This is what enables this LSB to endure 2,000 cycles. 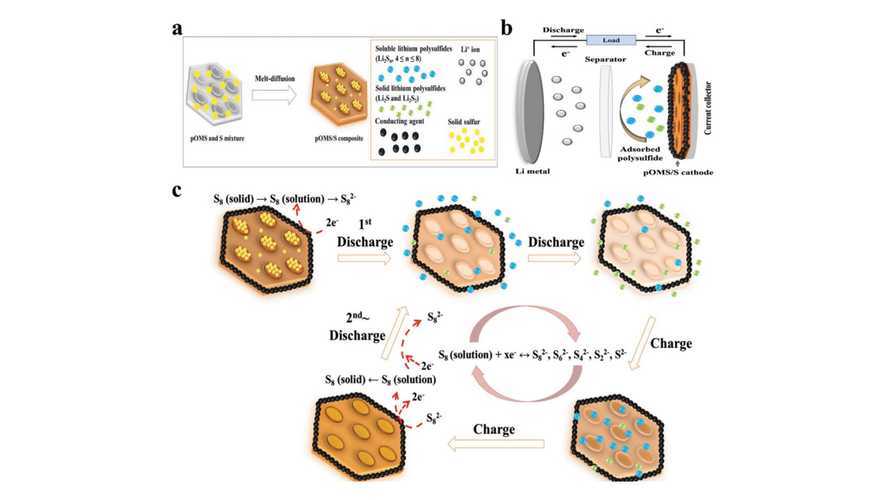 It is just a pity that the study, published at Advanced Energy Materials, did not disclose how energy-dense this Li-S cell was. When we have a 2,600 Wh/kg battery that resists 2,000 cycles, we’ll have a 38.5 kg cheap battery pack with 400 mi ranges or more. Just let that sink in and what something of that sort could represent for electric cars.

A while ago, Chinese scientists also presented carbon nanospheres as a solution for LSBs. Whatever is the right approach to produce and sell them, we just wish they do not demand much more time to happen.