Carbon Nanospheres May Give Us High-Performance Lithium-Sulfur Batteries 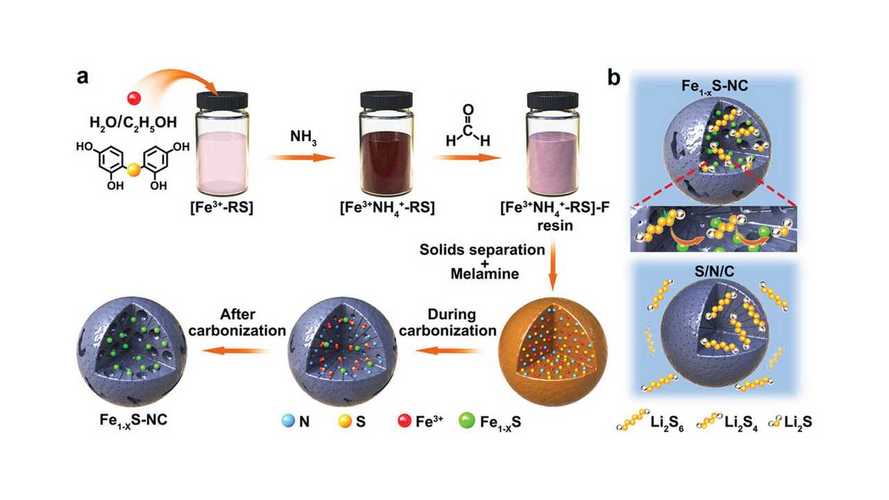 Our usual readers already know how promising lithium-sulfur batteries are. In theory, they have a high energy density of 2,600 Wh/kg and a capacity of 1,675 mAh/g. Regular lithium-ion batteries offer 265 Wh/kg and a capacity of 185 mAh/g in the best-case scenario. In other words, we are talking about batteries that can be ten times better than the current ones, but which still aren’t. Scientists at the DICP (Dalian Institute of Chemical Physics) may have found the solution: carbon nanospheres.

These nanospheres work like battery cathode nanoreactors. Being decorated by Fe1-xS, they manage to tackle something critical in the lithium-sulfur: lithium polysulfides (LiPs) dissolution. When they dissolve, the battery loses sulfur and cycling stability. In other words, it does not charge or discharge as it should.

The nanospheres have big pores to adsorb high sulfur loading of up to 75 percent. That avoids the dissolution of lithium polysulfides. According to the researchers, they have remained stable after 200 cycles under a current density of 0.5 C. Electric cars can face much larger current densities. Fast charging may submit them to up to 4C.

If the scientists can prove these carbon nanospheres can resist current densities as high as these ones, their solution may give the world batteries that are 10 times lighter for the current range they offer. You could also get a battery pack with half the size and five times more range, but there is another advantage that cannot be underestimated: cost.

Gallery: Will Carbon Nanospheres Give Us High-Performance Lithium-Sulfur Batteries?

Lithium-sulfur batteries use much cheaper materials to build. Sulfur is pretty abundant in nature. As we already told our readers, the magical number for EV adoption is below $100/kWh.

Although we can’t say what the cost of viable lithium-sulfur batteries could be, we imagine they could be much lower than the ones we now have for lithium-ion cells. Event LFP – lithium iron phosphate – batteries have recently had promising developments. Truth is that science makes the EV future look bright in most perspectives. It is just a pity that the future sometimes takes so long to arrive.