Tesla sold about 33% of all new passenger plug-in cars in China during the first five months of 2020.

Passenger car sales in China increased in May by 7% year-over-year, which is great news, but unfortunately, the plug-in car segment is still lagging behind.

According to EV Sales Blog, almost 73,000 plug-in cars were sold in May (down 32% year-over-year, although results in the first half of 2019 were particularly high). A significant drop affected the market share, which is now 4.4%. On the positive side, it was the best month so far this year.

The Chinese market is dominated so far this year by the Made-in-China Tesla Model 3 (with a small dose of imported units). Tesla sold almost 11,500 Model 3 in May, while other models are far from even 5,000.

Only four models in the top 20 are plug-in hybrids of some sort, but soon there might be just three. 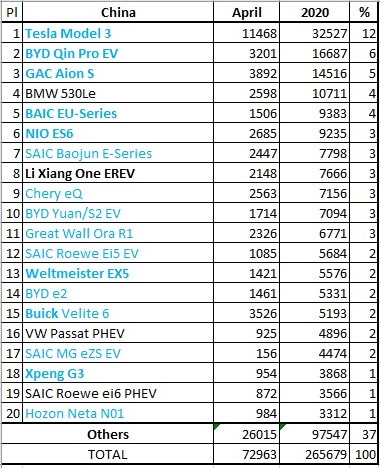