This time around a shift isn't missed and the Ram actually takes the lead off the line.

This huge and heavy modified diesel Ram pickup truck takes on a Tesla Model 3 Performance in a drag race and, rather surprisingly, the truck gets the jump off of the line and actually keeps pace with the Model 3 almost until the end. Yes, the Model 3 wins, but considering this is against a huge truck, it's a much closer contest than we'd expect.

Just the other day, we came across this diesel Ram pickup truck featured in a race against this very same Model 3 Performance. We considered the race a close one, but there was a missed shift by the Ram truck driver that allowed the Model 3 to pull away.

However, since the race was so close at the very start, we figured perhaps the Ram could actually win if the shifts were right and guess what? It can and does. At least for the first couple hundred feet or more. 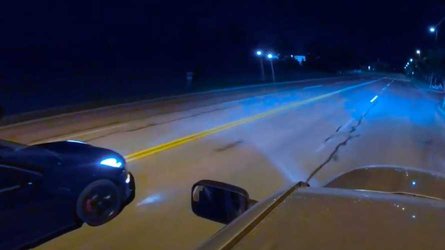 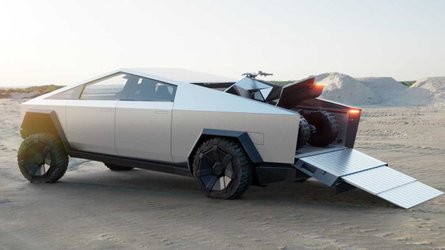 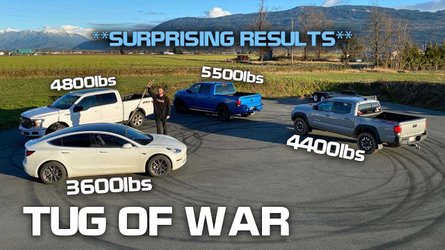 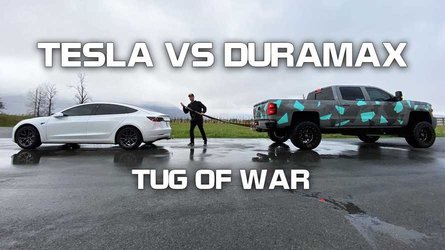 The owner of this particular Ram truck sent us some new footage in which you can see that the diesel truck is a very even match off of the line for the mighty Tesla Model 3 Performance. This is unexpected when you consider that a Model 3 can handily beat a Ferrari, but it's all about the torque and traction and, apparently, the Ram has lots of both.

Cone is the finish line!! This is a rematch between the Tesla Model 3 Performance package and the big turbo diesel truck. I did a walk around of both the vehicles especially the Tesla to show off its red Brembo brakes and spoiler.

The truck's shifting problem was fixed so this race was a little bit closer but the electric power still pulled ahead for the win. The videos are all the same race from different angles.

The video features a race between what's surely a highly modified diesel Ram pickup truck and Model 3. It's a street race though and we strongly advise against this.

However, the result was so surprising that we thought we'd share it. The video description describes the matchup as a race between a Model 3 performance and mega cab Dodge diesel. The truck, an older Ram, shocks us by its ability to basically match the Model 3 Performance off of the line. Few, if any, races between a Tesla and another vehicle start this way. Almost always, the Tesla gets the immediate jump, yet this very heavy and hugely torquey truck almost keeps up with the Tesla from the start.

Grab a look at the video and let us know if you're as impressed as us by the truck's ability to keep pace with the Tesla.

Below is the previous video in which the Ram misses a shift: