He went to check the very first totaled Taycan we have heard about.

When Rich Benoit announced he would have a new car to replace Delores, the EV community went mad. Tesla's decision to cut not only supercharging, but also fast charging from some salvaged vehicles – only Model Ss and Model Xs, not salvaged Model 3s – could have lost it an EV advocate. Luckily, Benoit loves the way an EV drives. In other words, he still may stick to electric cars. What about a salvaged Porsche Taycan?

We first heard about this vehicle with Kyle Conner, our InsideEVs YouTube channel videomaker, and the man behind the Out Of Spec Motoring channel. Our immediate thought was that Benoit could rebuild this electric Porsche and remain driving something powered solely by a battery.

Benoit heard about it from Steven Salowsky – his YouTube channel manager. Both of them drove to Copart to check the totaled Taycan in Benoit's BMW i8, but not before making fun of tree huggers that claim to love Tesla because it will save the planet. Benoit also gets a good laugh about that allegation at the end of the video. 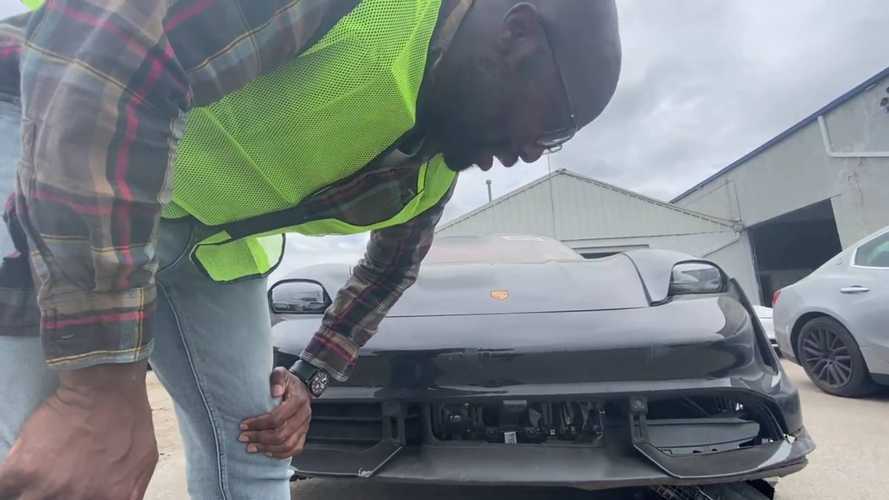 When they get to Copart, Benoit's first task is to mock a Maserati Ghibli as an ordinary car that charges more than it should for its ordinariness. Ironically, rumors state it will be Maserati's first PHEV. Whether you agree with that or not, you will giggle when you get to this point. The electric Porsche analysis proceeds right after that.

Benoit needs to answer quite a few questions. How damaged is the electric car? How much work will it demand? The most important question is: where will anyone willing to fix it get the necessary parts from? As the first salvaged Taycan, it will not have other units to help recover it. Only Porsche...

His first impression is that the Taycan will need some work on its front bumper and the two front wheels. He wonders if it is possible to jerry-rig some parts just to make the Taycan run again. Even the suspension seems to be fine until he asks to see the car from underneath. Watch the video to discover that with Benoit. Spoiler: things are much worse than they seem.