As Rich Benoit appropriately asks, who owns the cars?

If you have still not watched Rich Rebuild's last video, you should. It makes a comprehensive catch up of all the videos Rich Benoit has created to show issues Tesla has. All that to mention something the company decided to do and that may also become a problem in the future: disabling the capability salvage Teslas have to fast charge at third-party fast-charging networks. 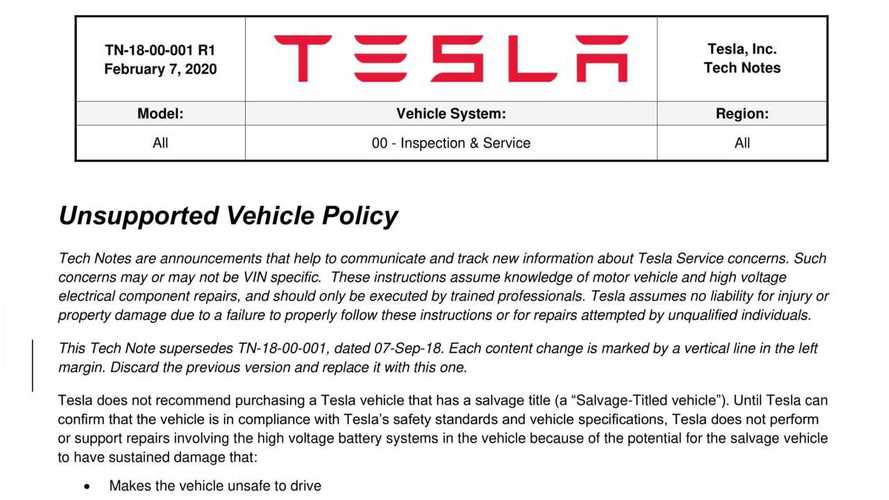 We received this information from Yaro Shcherbanyuk, who we mentioned here when a strange accident happened to a Tesla Model S. Shcherbanyuk works at Calimotive.com, dismantling and recovering Tesla vehicles. Just like Benoit did with his Delores.

Shcherbanyuk got in touch on February 11. This was his message:

We immediately thought about Benoit and sent him a message the next morning. One of our competitors wrote an article about the new policy on the same day, but after we sent the email. Although we initially thought Benoit referred to our message in the video above, his viewers probably read the competition's article and wanted to know what he thought about the new Tesla policy as much as we did.

Benoit answered that Tesla already did that and "sort of allowed Supercharging for prior salvage cars," provided they had gone through Tesla's certification program. We are not sure he saw what was different when we sent him the new policy or when he read the article, but the fact is that the matter inspired him to create a new video.

The YouTuber agrees that Tesla has to protect its Supercharger network, but he sarcastically criticizes the company for many of its practices. He also asks who owns the cars: Tesla or the buyers. Benoit does not mention that, but this is the same sort of question Ferrari clients often have to ask with the way the Italian company acts towards its products. Many clients have been sued for modifying them. Tesla seems to want to follow the same path.

Shcherbanyuk told us the American EV producer has not titled the policy "unsupported vehicles" by chance. They are of many kinds.

“This doesn't only apply to salvage title cars. This applies to any unsupported Tesla car. Many times, if you take your Tesla to a different county, it can and usually will be marked as unsupported. So imagine you're spending $80,000 on a new car but something has come up and you have to move to a different country and want to take your car with you. Tesla decides that's a ‘no’ and blocks you off from supercharging. Now you're stuck with local driving because Tesla is a big brother and you shouldn't be allowed to fast charge or supercharge in another country.”

If that is your case, pay attention. You may end up without Supercharging in the middle of a trip, as Benoit shows in the video below, published in May 2018.

Curiously, Benoit's metaphor for what Tesla did at that time is the same one Jason Hughes, from HSR Motors, picked to give us his impression of what Tesla's new policy dictates.

“Tesla has been disabling supercharging on salvage cars for years now. I'm honestly just waiting for someone to sue them on it because it's clearly not legal for them to do this. They could certainly block salvage cars from charging on the supercharger side – although that's also probably questionable legally – but they're modifying people's cars without permission and removing a feature of the vehicle. Now they're even explicitly stating they're disabling third-party fast charging also. To me, this is no different than Tesla coming to your car and swapping your 21" wheels with 19"s without permission, or swapping your leather interior with textile just because an insurance company decided to total out the car.”

Hughes is also known as "Tesla hacker," and we have had his help several times. He was the one that helped defend Tesla when it was under the accusation of unintentional acceleration, but he also helped us talk about the MCUv1 issue early Teslas have. Something that Benoit brought up for the first time.

Hughes also released a dashcam video of the accident that he refers to below.

“For example, my yellow Model S was recently totaled and will have a salvage title. The damage to the car was mostly superficial – three-quarter panels, a couple of doors – and the car was still driveable. Nothing mechanical or electrical was damaged.

However, Tesla's current policy means I can never supercharge that car ever again – even if I decide to keep it and repair it – because it will have a total loss salvage title.”

As you may imagine, he does not see the new policy as something acceptable.

“Overall, it's utter nonsense. It's a garbage policy that just has no basis in reality. Tesla has no right to modify people's cars without permission, especially if that modification is removing features that were part of the vehicle at the time of sale. I'd love to see this move through court, personally.

The sole purpose of it seems to be to force people to buy new or clean title used versus buy a salvage car and repair.”

Shcherbanyuk has the same impression.

“I think that Tesla is painting the wrong picture here. They are advocating a green Earth with electric cars, but as soon as someone wants to bring one back to life, they start with their limitations.”

Hughes even disputes the only point Benoit claims to be fair in Tesla's new policy: safety concerns at the Supercharger network.

“There is no legitimate safety concern with this. The vehicle and chargers do so many sanity checks when fast charging that almost anything that could be a problem would be caught when attempting to charge.”

"It looks like Tesla is protecting themselves so that tinkerers can't cause damage to cars – and potentially supercharging equipment. It makes sense, and I agree with that policy. There is a gray area in that some salvage cars did originally 'pay' for supercharging so it should be for the life of the car if that was the original agreement. Thankfully, Tesla gives the option to have the car re-certified. I just hope they don't have that option just for show and that they actually do thorough inspections and allow cars that really should be able to supercharge to get back on the network."

Hughes is certain that this is not the case.

“Keep in mind, this policy explicitly states there is no way to get Tesla to enable supercharging on salvage vehicles. The inspection and such does not get you supercharging back.”

The person in the second Rich Rebuilds video we posted here states something similar. So does Shcherbanyuk.

“Under Tesla's labor codes and rates, the inspection is listed at 1.5 hours and most service centers charge $195 an hour. I've heard people paying as much as $800. Just so you know, passing the inspection does not turn supercharging back on.”

We would love to hear Tesla about this new policy, but we don't think the company will contact us or reply to our message about it. In case you have any points to make regarding it, please feel free to contact us or to share your thoughts below.