It's expected that soon it will produce more than 500,000 xEVs (BEVs, PHEVs, HEVs) packs annually, including those for the EQC.

Mercedes-Benz has put the foundation under its electrification offensive with an investment of over €1 billion ($1.1 billion) in nine battery plants in seven locations on three continents.

The first and main site is Kamenz near Dresden (Germany) where the company has two plants operated by its wholly-owned subsidiary Deutsche Accumotive - first since 2012, and the new, bigger one since 2018.

This site has a special role of being a competence center for the global battery production network. The cumulative production of xEVs (BEVs, PHEVs, HEVs) battery packs already exceeded 500,000 and soon, the new plant in Kamenz is expected to produce 500,000 packs annually. Some of them are for conventional hybrids Mercedes-Benz EQ Boost, some for plug-in hybrids (EQ Power) and some for new all-electric models (Mercedes-Benz EQ like the EQC).

The other battery pack plants are: 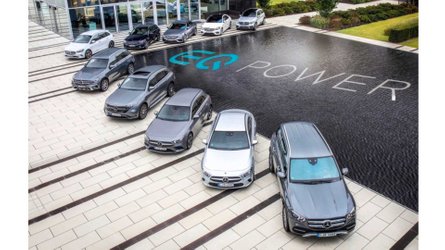 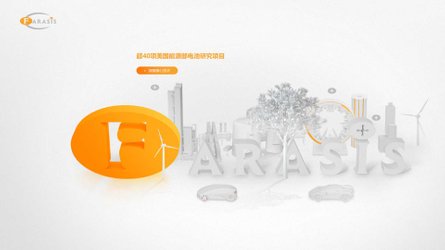 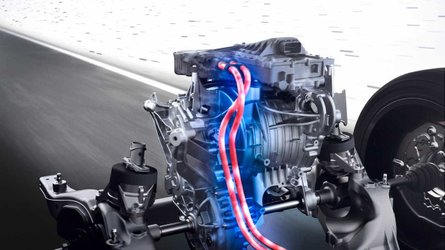 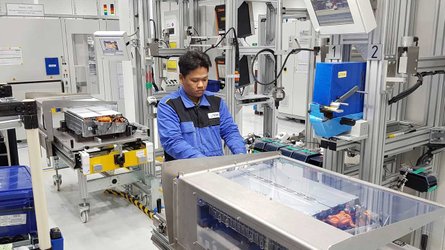 The video above and the gallery below presents the Deutsche Accumotive plant in Kamenz and Mercedes-Benz EQC battery production.

The manufacturing lines are highly automated and quite amazing, but the plant still employs a lot of people - some 1,300.

"Producing this highly complex lithium-ion battery requires multiple production lines that are approximately 170 meters long, each with more than 30 production stations and with a high number of production steps. Absolute precision is necessary to manufacture the battery systems consisting of 384 battery cells and many other components. The battery cells, for example, are welded with a laser with a tolerance of only 2µm using modern automation technology."

Stuttgart/Kamenz. Local battery production is an important success factor for Mercedes-Benz AG’s electric offensive and the key element to flexibly and efficiently meet the global demand for electrified vehicles. The company is therefore focusing on establishing a global battery production network and is investing more than one billion EUR to this end. The network will consist of nine battery factories at seven locations in Europe, North America and Asia. Mercedes-Benz’s wholly owned subsidiary Accumotive in Kamenz, Saxony will play a special role in this. As the competence centre for the global battery production network, it has been producing drivetrain batteries for electric and electrified vehicles from Mercedes-Benz and smart as well as light commercial vehicles since 2012. After the second plant – designed from the outset to be CO2-neutral – went into operation in 2018, the Mercedes-Benz subsidiary successively increased its production capacities and volumes. The annual production volume will soon exceed half a million battery systems for hybrid, plug-in hybrid and purely electric vehicles. The plant is also preparing for the next milestone of the product and technology brand EQ, which will also offer electric variants in the compact segment.

Accordingly, local battery production is an important success factor for Mercedes-Benz's electric offensive and the key element for meeting the global demand for electrified vehicles flexibly and efficiently. Deutsche Accumotive GmbH & Co. KG is a wholly owned subsidiary of Mercedes-Benz AG and has been producing drivetrain batteries for electric and electrified vehicles of the Mercedes-Benz and smart brands as well as for light commercial vehicles since 2012. In Kamenz, about 50 kilometres from Dresden, the company has two factories that manufacture drivetrain batteries for electric and plug-in hybrid vehicles as well as batteries for 48-volt systems. The Mercedes-Benz subsidiary Accumotive acts as a competence centre within the global battery production network of Mercedes-Benz Cars, which has nine battery factories at seven locations on three continents. Accumotive has more than 10 years of experience in the efficient production of highly complex battery systems. Thanks to a close interlinking and consistent digitalisation of production processes, all locations of the global Mercedes-Benz battery production network benefit from this expertise. Additional locations in Europe and the U.S. will soon start operations to meet global battery needs for vehicle production.

“As a competence centre within our global battery-production network, the Kamenz site – with its broad product portfolio – plays a decisive role in the implementation of our “Electric first” offensive, says Jörg Burzer, Member of the Board of Management of Mercedes-Benz AG, Production and Supply Chain Management. “Flexibility is the decisive feature of our global production network of vehicle and powertrain plants. Our goal is an organic global network in which production capacities can be flexibly shifted between plants around the world. With more than 10 fully electric EQ models and a large number of plug-in hybrid and hybrid vehicles - for which we produce the battery systems here in Kamenz and within our global network – we can flexibly and efficiently meet the worldwide demand for electric and hybrid vehicles and gradually increase the electrical share within our vehicle range.”

Equipped for the future: Gradual increase in production volumes

Since Accumotive’s start of production, the Kamenz plant has produced well over half a million batteries based on lithium-ion technology for electric and plug-in hybrid vehicles as well as for 48-volt systems. Expanding the plant with a second battery factory that opened in 2018 was an important step for the company’s electric offensive and in meeting the growing demand for highly efficient batteries for electrified and electric drives. The company is gradually increasing its production capacities. The second battery factory at the Kamenz plant produces battery systems for the Mercedes-Benz EQC (combined power consumption: 20.8-19.7 kWh/100 km; combined CO2 emissions: 0 g/km)[1], among other things. Producing this highly complex lithium-ion battery requires multiple production lines that are approximately 170 meters long, each with more than 30 production stations and with a high number of production steps. Absolute precision is necessary to manufacture the battery systems consisting of 384 battery cells and many other components. The battery cells, for example, are welded with a laser with a tolerance of only 2µm using modern automation technology.

“With the plant expansion and successive production ramp-up, we have now expanded production in Kamenz to such an extent that we will soon exceed an annual production volume of more than half a million lithium-ion batteries – and that number will rise. Together with our colleagues in research and development and many partners and suppliers around the world, we ensure that the batteries for our electric and electrified vehicles meet the high-quality standards of Mercedes-Benz. We are also getting ready for the next generation of EQ models in Kamenz: electrical variants in the compact segment are not that far away,” says Jörg Burzer.

The Kamenz plant has two battery factories and a total production and logistics area of 80,000 square meters. The second battery factory, which opened in 2018, runs on state-of-the-art equipment and uses a wide range of Industry 4.0 technologies. It was also designed as a CO2-neutral factory right from the beginning and thus plays a pioneering role with regard to Mercedes-Benz AG’s sustainability goals: a combined heat and power plant and a 2-megawatt photovoltaic system combined with geothermal energy power the production plant. The entire building is designed according to the production flow and lines. Special assembly equipment ergonomically assists and makes it easier for employees to handle heavy parts. The plant uses a variety of Industry 4.0 technologies, such as digital control and production tracking. Among other things, this guarantees the complete traceability of every delivered battery and its components, including all its production data. Around 1,300 people are currently employed at the Kamenz plant.

On a course for growth: global battery production network