European plug-in car sales are blooming and Spain, in particular, is one of the examples.

Spain is one of the hottest plug-in electric car markets right now, as after a great year in 2019, January and February have proven to be the best months ever.

In January, sales reached a new all-time high of 3,265 with almost 400 Renault ZOE registrations. Then, February brought another 2,912 (2nd best ever) doubling the result from 2019.

The market share for plug-ins in Spain last month was around 3.3%, and 58% of the volume falls on BEVs.

The French plug-ins seem to be the most popular at the moment, as besides the Renault ZOE, the Spanish appreciate also the new Peugeots.

Interestingly, the new SEAT Mii electric did not make any splash yet. 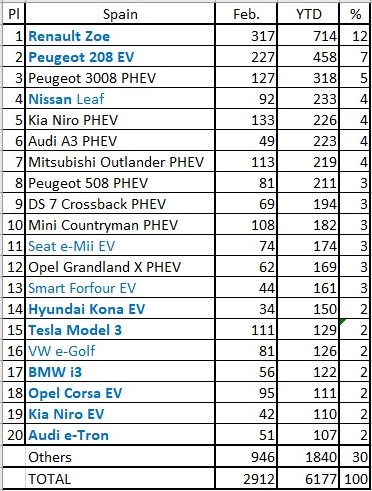