More than a quarter of the Swedish market were plug-ins.

In February 2020, the number of passenger plug-in car registrations almost doubled to 5,435. Moreover, the plug-in market share remains very high at 26% (it was 33% in January)!

We are really amazed how quickly Sweden is following in the footsteps of Norway (Norway currently has a plug-in share of 2/3 of the total market with the advantage going to BEVs).

The top nine models on the plug-in list for the year are plug-in hybrids (station wagons/combi and SUVs mostly). The top one was the Volvo S60/V60 (counted together) with 666 registrations in February and 1,079 YTD. 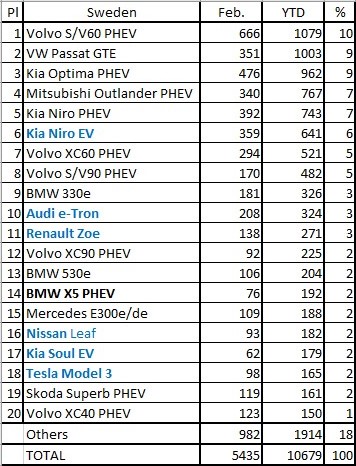