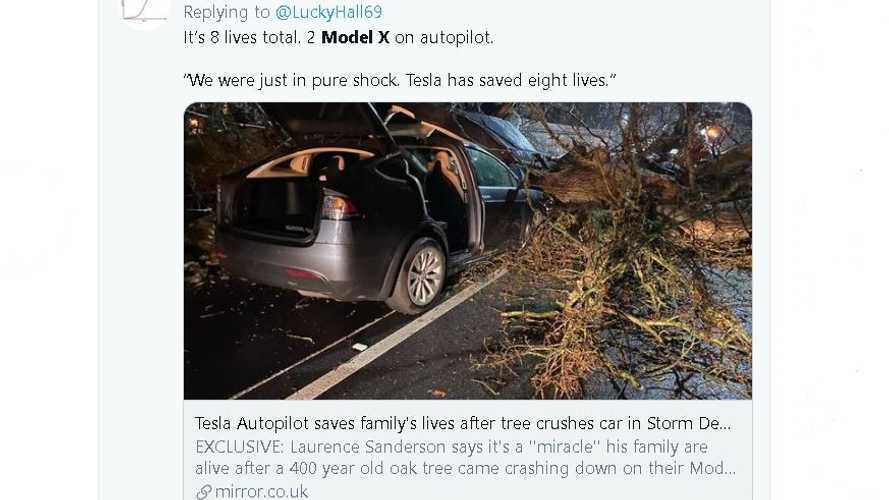 Laurence Sanderson, his wife, and their three children were driving in a Tesla Model X on their way to Dorset for vacation. Bomb cyclone Storm Dennis uprooted a 400-year-old oak tree in Devon and sent it crashing down toward the Tesla. Reportedly, the SUV's automatic emergency braking system kicked in and saved them.

The crazier part here is that another Tesla Model X was traveling toward the Sandersons when the tree fell. Its standard safety technology also reportedly reacted and saved all occupants.

Tesla Model X Split In Half In Crash: All Involved Are Reportedly Okay

It's important to note here that the original story, and Sanderson himself, credits Tesla Autopilot with the amazing save. However, there's no way of knowing for sure if the Autopilot system, Tesla's automatic emergency braking feature, or a combination of the two were actually responsible for the car's actions.

At any rate, the safety technology in both Model X crossovers appears to have done its job to help keep all eight people from being crushed by the tree. Not to mention Tesla vehicles' excellent track record for safety and the structural integrity of the vehicles themselves.

''My wife is a bit battered and has two black eyes, a bump on the head and bruising to her chest but apart from that we escaped unscathed.

''We were driving along and out of the corner of my eye I saw the tree coming down. The car was on Autopilot and the emergency breaking kicked in.

''It was chaos with smoke coming from the car and people shouting to get out. People from other cars came to help get the kids out. It was an amazing response.

''Power lines came down and there were live wires at the back of the car so we were getting everyone to safety while being careful of them.

''My wife thought she was going to die when she saw the tree fall. I can't believe we're all still alive. Elon Musk has done us proud.''

As all of this was happening, Josh Whitelock was approaching the scene from the other direction. He had two passengers in his Tesla Model X. He shared:

''I was on Autopilot driving home when I saw a flash from the power line which lit up the tree as it fell. We stopped suddenly. There was a loud crack and then the sound of metal on metal.

''I was expecting to turn around and see my girlfriend and her mother impaled by branches but incredibly that wasn't the case. They were both ok apart from a bit of whiplash. It was a miracle we all survived."

To read the entire article and see multiple images of the wreckage, follow the source link below. Then, scroll down and leave us a comment.