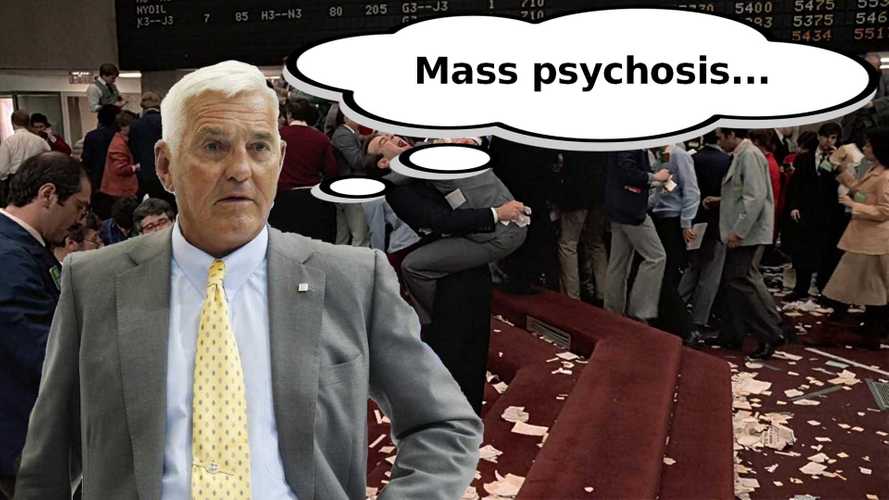 The veteran executive finds no reasonable explanation for that despite Teslas having brilliant qualities.

BBC Business Daily decided to investigate the recent surge in Tesla's stock valuation. As good journalism always demands, they have talked to more than one relevant source about that. In this case, with three of them. One of the people interviewed always calls everyone's attention: it was Bob Lutz, who also talked to finance guys and could not understand why that happened. The veteran car industry executive even attributed it to "psychology or almost a mass psychosis."

Bob Lutz: Tesla Is Finally Being Run Like A Normal Business
⠀

Bob Lutz On The Model Y: 'It Is Terminally Ugly, A Humpback Thing'

Ed Butler, the podcast presenter, also interviewed Craig Irwin, a stock analyst at Roth Capital, and David Bailey, a professor of business economics at Birmingham Business School in the UK. The only one able to come close to any explanation for that was Bailey.

The business economics professor thinks that 2020 is "kind of year zero for electric cars in Europe." More stringent emission targets will make these vehicles mandatory to big carmakers.

“I think there’s a sense that with battery costs coming down, range improving, the costs of these cars improving a lot, there will be a tipping point in the early to mid-2020s. So we are just kind of getting to the point where it’s really going to take off.”

The rising share prices would be the anticipation of that movement. As the most advanced company in what relates to this technology, Tesla would be in a privileged position to receive investments from people that do not want to miss this train. Its shares would be a ticket bought in advance.

Irwin is not so confident if this trip will ever happen.

“When you look at the broader picture and consider Daimler is close to about $50 billion. So, trading close to three times Daimler? Or five times the value of BMW? Personally, I think that’s frothy.”

Roth Capital's stock analyst valued Tesla stocks at 350 a share, and he believes people are assuming "aggressive growth rates" of up to 50 percent for years. That would explain why the company's valuation is currently so high, but Irwin sees no concrete evidence to support that and says "that assumes Tesla operates in a vacuum."

“I have been bullish and bearish. In this case, on Tesla, my view is more of a fundamental view. It is more of where I think Tesla will fit in the puzzle in the next five to ten years. I don’t think my rating is the wrong rating here. I am not uncomfortable with it. The reality is my fundamental view. I think it is very well-founded and very sound. I am still a huge fan of EVs and my clients all know that.”

Bob Lutz agrees with Irwin, and he has a much less optimistic point of view than Bailey. He sees that not as a problem with Tesla vehicles, but as a market situation.

“The big transition is somewhat of a fiction. The actual global demand for electric vehicles is heavily dependent on government subsidies. Whenever they go down, the electric vehicle market collapses because, other than die-hard environmentalists, electric vehicles are not that attractive to the general public. The reason why everybody is coming out with them is that they are de facto mandated by government policy.”

We still have not made an article about Tesla sales when the federal tax credit ended in the US for its cars. Mostly because automakers in general and Tesla, in particular, seem to have a problem letting people know how many cars they sold. Anyway, Tesla appears to still be selling a lot, even without government incentives.

We showed in December that Portugal does not have credible incentives for electric cars. Anyway, they are selling well there because people realized it is much cheaper to run them, so we would dispute that EVs only sell because governments want them to, even if that is part of the equation.

These policies evidently help. And they do because automakers would not bet on a transportation revolution with all the investments they have made in producing engines. Helping all that become suddenly obsolete would bring these companies to bankruptcy quickly.

Ironically, they are not going for electric mobility solely because governments want that. Teslas became so desirable that luxury automakers had to offer something at least remotely similar to compete. The Tesla effect made Audi, BMW, and Mercedes-Benz cars' devaluation break records. So we'd say Lutz is only partially right in his point. But he still had something to add.

“Electric vehicles are inherently more expensive to produce, are somewhat inconvenient – because of the lengthy recharging time – and they have to be jammed into the market, usually with incentives or subsidies. That means they are not profitable.”

Electric cars are expensive to produce mostly because previous investments where made solely on the development of ICE vehicles. And also due to an element I have been trying to call people's attention in my articles: batteries. EVs are more dependent on them then they should be. That may look obvious, but it goes beyond simply providing energy to these vehicles. It affects the lives of used car owners.

Batteries account for 51 percent of the production cost of EVs. Automakers are charging way more than $200/kWh for their replacements. If their prices do not drop, used EVs will have to be thrown in the garbage should their batteries fail. If some ICE cars already are not worth repairing it their engines blow up, with a cost equivalent to 18 percent of the price of these vehicles, what about an automobile that relies so heavily on a single part?

“The big component in any EV is the battery. Lithium-ion prices are fairly stable at around $240, maybe $200 per kWh. As a rule of thumb, you figure 5 miles for every kWh. If you want a 300-mile battery, you’re going to have a lot of kWh and that results in an extremely heavy battery.”

Then Lutz is confronted with the fact that battery prices have fallen, and he acknowledges that they dropped from $900/kWh to the current $200/kWh, but the veteran executive thinks these prices have reached their bottom.

He may be right regarding lithium-ion batteries, but other chemistries are being evaluated that could be much cheaper. There is the expectation for a commercial solid-state battery. Wouldn't that help? Probably, but we get that Lutz is talking about current Tesla's stock prices. And the company relies on the present technology, not on future ones. At least until Tesla Battery Day.

Lutz also disputed that European manufacturers are investing more than GM on electric mobility. The executive says he only fears the company is putting too much effort into that since he believes EVs will only account for 15 percent of the market by 2030. More optimistic approaches believe in a 25 percent market share.

The former GM executive said the company is not making any money on the Bolt EV and pays compliments to Tesla vehicles.

“There’s nothing wrong with the car. It is one of the best-driving, best-performing, best-looking premium sedans in the world.”

He also mentioned how the Model S does well in Switzerland, for example. Would that be due to EV incentives or just due to a natural demand? We ask our Swiss readers to help with this topic. Lutz does not get into details about this, but his reasoning about Tesla's stock prices is more on the fundamentals than on the merits of its products.

“I talked to people at Goldman & Sachs who are usually the world’s greatest experts at explaining stock prices and they’re now are asking me whether I have any idea what the heck is going on with Tesla stock. Nobody can explain that. It is so far beyond any fundamental return that any shareholder could ever expect. It is driven purely by psychology or almost a mass psychosis. But ultimately, ultimately, the share price responds to financial fundamental reality. And that day will come.”

Tesla has posted profitable quarters but is still a company with a lot of debt. Who do you believe to be right in this discussion? Are Tesla stocks at a fair price at this point, with the company being more financially consistent? Will they be even more expensive or is there any chance that an eventual bubble will burst? We'd like to read your opinions below.