Will The Porsche Taycan Turbo Go Further Than The EPA States?

Independent testing and even Porsche seem to suggest the answer is yes.

Porsche seems to believe the EPA range figure of just 201 miles for the Taycan Turbo is a bit understated and independent testing appears to confirm this. Or does it?

Earlier today, InsideEVs broke the news that the EPA rated the range of the Taycan Turbo at only 201 miles. It's a disappointing figure, but maybe there's hope for higher real-world numbers.

It seems Porsche was prepared for this low figure to come out and responded with some words that lead us to believe a higher figure is likely achievable by real-world owners of the Taycan Turbo.

Porche is backing this claim with some test results from another organization called AMCI. This organization conducts independent tests of vehicles at the request (and likely paid for by) of the manufacturer.

In regards to the testing, Porsche told InsideEVs:

We do a lot of testing with third-party vendors for various things such as performance figures, fuel economy, interior noise, all kinds of different metrics.

For the Taycan, obviously range was going to be an important one.

We actually started this process months ago, specifically because in Europe the WLTP test uses a different methodology altogether from EPA.

We had AMCI do testing beforehand. We didn’t know exactly when the EPA figure was going to come out.

So, what are the results from AMCI testing then? Grab a look for yourselves right below: 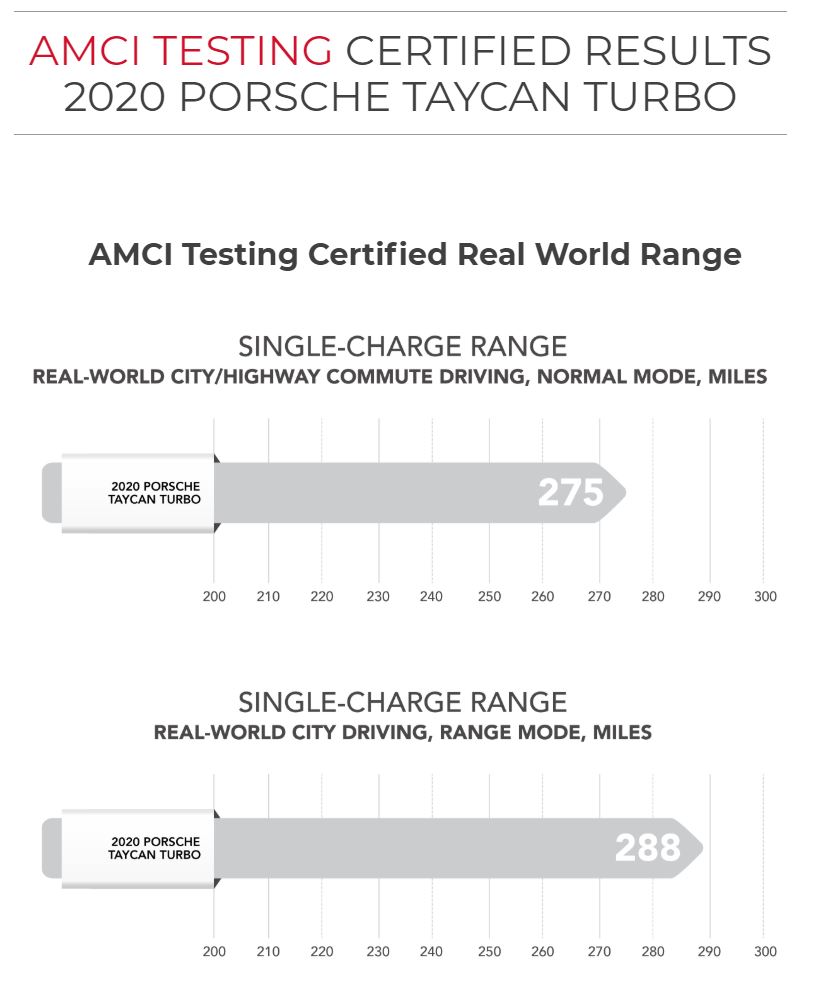 That's vastly improved over the 201 figure from the EPA, but there are some issues with testing. For one, it seems these tests are conducted in Southern California where weather conditions are quite ideal for EVs. Secondly, it doesn't seem to account for temperature variations, just as tested conditions.

Here's a bit more from AMCI on the testing process:

AMCI Testing’s Certification protocol is based on the statistical imperative for unbiased, repeatable results:

The Taycan Turbo was operated in Normal Mode with Regen set to “Auto” and HVAC to “ECO”
Driving was precisely coordinated at the speed of traffic up to and including the legal speed limit during city driving, and up to 5 MPH over the legal limit on highways

For more from AMCI on Taycan testing, follow this link here.