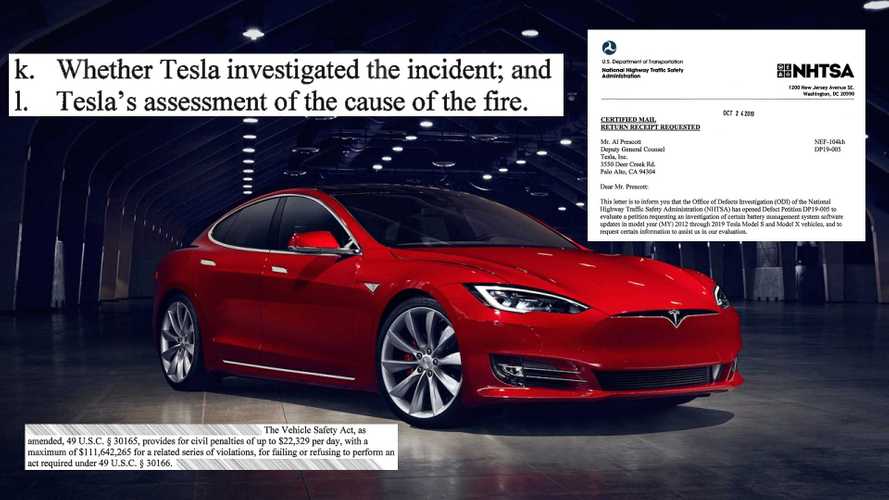 It emerged due to the suspicion that the company used software updates to hide hazards.

The NHTSA has a 120-day deadline to respond to defect petitions. The agency is said to fail to comply with this deadline most of the time, but it has taken exactly 38 days to address this one.

The attorney Edward C. Chen sent his request to NHTSA on September 17, and the answer came last October 24. NHTSA decided to investigate the battery safety of the Model S and the Model X, affected by 2019.16.1 and 2019.16.2 software updates. Tesla is accused of using them to mask safety hazards, such as spontaneous fires.

That is what Chen and his client, David Rasmussen, decided to ask the agency to investigate. Rasmussen was one of the owners that reported a 12 percent loss of range after the updates back in May. He told us he tried to get explanations from Tesla in a friendly way for months. As he did not get any satisfactory one, he sued the company on August 7.

Tesla Update May Have Lowered The Model 3's Range As Well

Chen said the following in his defect petition:

Tesla is using over-the-air software updates to mask and cover-up a potentially widespread and dangerous issue with the batteries in their vehicles.

By deciding to investigate, NHTSA is “taking this seriously,” as David Rasmussen warned us about the agency’s response. Now it needs to establish if the range reduction was a way to avoid fires or just “a software update designed to improve battery longevity,” as Tesla claims.

In order to do that, NHTSA demanded extensive documentation from Tesla in nine topics that show how deep the agency wants to dive into the issue.

In short, it wants info on all cars the company has produced for sale or lease in the US so far – including warranty periods and if they have Supercharger for free. Anyway, this excludes the Model S that caught fire in Shanghai, and that could have triggered the update.

The second step refers to all “property damage, fire, injury or fatality” situations with these vehicles. NHTSA asks for reports on complaints, pre-litigation demands, and lawsuits involving such scenarios.

All these cases have to be reported in a Microsoft Access file with all the info the involved cars may have. Item 3 brings perhaps the most relevant request for the investigation. It asks if Tesla investigated those situations and what was Tesla’s conclusion for the causes.

The topic 5 requires information on all updates from January 1, 2017, to date related to “charging rate, charging capacity, or battery thermal management during or after charging.” NHTSA requires descriptions of the updates and reasons for them.

The topic 6 is on all analyses and tests Tesla has ever done regarding charging and battery longevity. Item 7 asks specifically about fire episodes that are related to the defect petition. Item 8 shows NHTSA knows what to investigate in electric cars by asking about dendrite growth and cell shorts. Finally, NHTSA wants to know which vehicles received 2019.16.1 and 2019.16.2 software updates and when.

After NHTSA receives everything it required, it will perform an investigation to determine if Tesla should recall the cars that may present fire hazards or if the updates’ purpose was really to make the battery packs last longer. Tesla may also decide to perform that voluntarily.

In 2018, The New York Times published an article on defect petitions. The article states 43 of them had been received by NHTSA until that point – including the one that led to Ford Pinto's recall. Of these 43, 12 resulted in recalls or extended warranty periods. We have no idea how many NHTSA accepted to investigate. Whatever the number was, it has just increased.

What about the lawsuit?

While NHTSA waits for the documents, Tesla had until November 3 to respond to the court. It has hired the Morrison Foerster law firm to make its defense.

After Tesla's official response that it would give range back to affected customers, we asked Rasmussen if he noticed any improvements.

"The day following the filing of the lawsuit, when Tesla said they would recover lost range, I got 10 miles back of the 30 mi they took."

He was kind enough to update the graphic we had already published – the first one above. But did the improvement persuade Rasmussen to give up the lawsuit? The answer is he hired the Lieff Cabraser Heimann & Bernstein law firm to help Chen in the process.

We can see a battle of law giants on the horizon. Not only due to the suspicion of fire hazards with the batteries, but also because the lawsuit opens a discussion about whether Tesla can push changes to its products without the owner’s authorization or not.

It may be noble to protect the battery even if it is not under warranty anymore, but at what expense? If there was no safety risk involved, would clients choose a longer-lasting battery pack in exchange for a 12 percent range reduction or the same one? Why not give them the choice?

If Tesla is so concerned with protecting its customer’s assets, why did it refuse to repair Model 3 units with defective paints that are still under warranty? Why does it apply a base coat just to the apparent parts of the vehicle? MCUv1 units that are failing due to excessive logging also need to be replaced, preferably under warranty. Or upgraded to MCUv2, as Elon Musk promised in March 2018 and has yet to deliver to at least 4,910 customers that signed a petition for that so far.