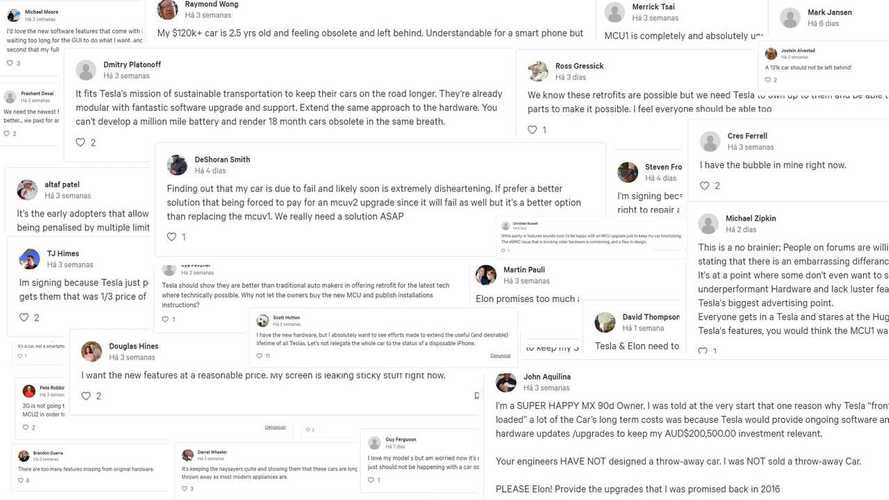 Nicolaj Frederiksen, the petition creator, talks about the messages left there.

The Tesla MCUv1 issue allowed us not only to talk about a problem that affects all Tesla cars made before 2018, and that threatens the ones after that. It also put us in touch with the people that are facing it, such as Jim Alger. It pushed us to show how to identify it. It led us to talk to Rich Benoit, who first revealed the issue. But the bottom line was always about the people involved. This article shows they are thousands, each with a different approach, something an online petition reveals very clearly.

Gallery: Why Do People Want To Upgrade Tesla's MCUv1? Check The Reasons Here

Nicolaj Frederiksen created the petition “Get Tesla to offer MCU2 retrofit for all of us with MCU1” last September. When we spoke about it here, the petition had almost 4,000 people supporting it. At the time of publishing this article, they were already 4,046.

“I've been following the situation around the MCU upgrade closely since March 2018 where the cars, overnight, were changed for the better. Elon Musk was confronted with this and told that it is possible to upgrade the hardware to the new MCU.”

“This is now over a year and a half ago and the MCUv2 upgrade seems to be just a myth. No one in or around Tesla can confirm that this is a possibility. Over the summer of 2019, Elon chose to respond to a tweet which again indicated that they are working on an upgrade option. But still, no word from Tesla.”

The petition creator decided not to wait anymore.

“I thought through what opportunities I would have to put this on the agenda. At the end of September, I decided to start a petition in the hope that all Tesla owners who wait and wait for the opportunity to upgrade will be taken seriously."

Frederiksen did not want it because of the MCUv1 issue.

“I haven’t experienced that sort of problem. Anyway, over the past year, the updates are demanding more from the MCU. That makes it act pretty slow and lagging when operating.”

He was concerned with other aspects. The petition reads: “With the opportunity to upgrade your MCU, the chance of both achieving higher sales price and value in use is greater. Everyone deserves a Tesla who will give you this.” Frederiksen discovered other worries.

“As the petition has gotten bigger and bigger, there have also been other angles as to why an MCU upgrade makes sense. When signing the petition, people write why they sign, and these statements are really good reading. They should be taken seriously by Tesla and Elon Musk.”

The gallery above shows the most interesting comments on the petition. You will see many are in different languages, such as German, French, or Italian. In the image below, the comments from Michael Zipkin, Ross Gressick, and DeShoran Smith deserve your attention:

Smith is clearly worried about the eMMC issue, but Zipkin just does not stand how slow the MCU became. He even compares it to a knock-off.

We have selected interesting and relevant comments with the screenshots in the gallery. It is a way for you not to have to go through all of them yourself. Many people appeal to Musk's promise. Others want Caraoke. Some are sympathetic, such as the best-voted post, from Scott Hutton.

Johnny Marshukov reports slowness and constant rebooting, one of the signs the MCU will fail soon. But other known issues also emerge, such as this from Douglas Hines.

One of the most meaningful perhaps comes from Dmitry Platonoff, which you can also see above. He asks what the point in doing a million-mile battery for cars that get obsolete in under 18 months is. That is the case for the ones that did not get the MCUv2 for a matter of days.

Will Tesla listen to these clients? Will the "early adopters" be left hanging for the upgrade Elon Musk promised? The answer is with Tesla. Perhaps the good Q3 results will give it extra motivation to provide these frustrated customers what they want: MCUv2 upgradability. Even if they have to pay for it, as Maryann Miller asks above and many others practically beg on the petition comments.