What Does The Tesla Model 3 Have In Common With A Cheap Toyota Etios? 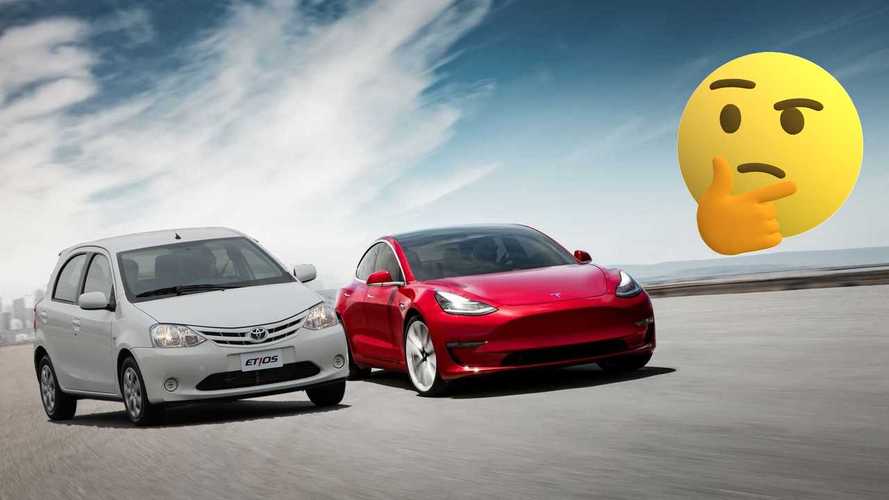 They both get no paint in some areas because nobody can see it. But is this ok?

You probably have never heard of the Toyota Etios. It is the cheapest Toyota car for sale in India and Brazil. With proper introductions made, we ask you: what does it have in common with the Tesla Model 3?

The pictures in this article will give you this answer but will raise many more. Especially this one: What role did paint have in “reducing material costs” Elon Musk referred to in the Q3 Earnings report call with analysts?

Gallery: Check The Similarities Between A Tesla Model 3 And A Toyota Etios

The image below came out precisely when this report first appeared. It is at the Investor’s Relation section of Tesla’s website, inside the Q3’2019 Update PDF. Pay attention to the front strut towers, still not covered by the frunk structure. Did you see it lacks paint?

In fact, what it misses is part of the paint job. Automotive paint itself comprises three steps: primer, base coat, and clearcoat. It comes after a series of treatments on the body panels, such as phosphate and E coat. These steps are the preparation for painting.

Despite what some still think, the Model 3’s body is mostly made of steel, as we already showed in August 2017. That means it goes through the same preparation and paint stages a regular vehicle endures.

While the primer is responsible for the body-in-white protection, it usually is not visible in most cars apart from in some developing countries. That is where the Toyota Etios comes in. Check out the image below, taken by Marlos Ney Vidal, a good friend from the Brazilian website Autos Segredos. He kindly allowed us to use it in this article.

It shows the Etios engine bay, where the Tesla has its covered frunk. Did you notice how similar they are? The Etios front strut towers also lack the base coat, to be more precise. Ironically, that was something Toyota tried to hide in all ways possible in its press materials.

Check the images below. Toyota released them from the presentation until its refresh in Brazil. All shots try to hide the fact that the car does not have the base coat on the engine bay. Savvy photographers or a company request?

Apart from the combustion engine and the motors, the Model 3 differs essentially from the Etios. While the latter was meant to be affordable, the Tesla is seen as a luxury car sedan, facing the likes of BMW 3 Series and Mercedes-Benz C-Class.

The Model 3 hides this lack of base coat in other ways. Not only under the frunk but also beneath the fenders. This image from a recent video from the Rich Rebuilds YouTube channel demonstrates that.

Tesla released another image from the Gigafactory 3 that show more parts of the car lack base coat. See it below.

The image shows the base coat is missing in many inner body structures. That proves the cars pictured before did not have a flaw per se. They have been fully painted only where Tesla decided to do so. Like Toyota did with the original Etios.

Tesla die-hard supporters will ask: “So what?” They should remember paint was one of the major complaints Model 3 owners had and still have about the car. The real question should be "Now what?" in the sense that it is necessary to discover whether this sort of manufacturing decision affects the quality of the paint or not.

We have tried to interview BASF about it. The chemical company supplies paints to Tesla. BASF declined to make any comments.

We then contacted many other specialists from the US. None had replied until moments before we were to publish this article. That was when we received a message from Al Steier. He is the  Director of the Benchmarking Innovation Center at Munro & Associates. And he had something we would never expect to have in such detail.

"We borrowed a coatings thickness instrument and took readings in various parts of the car including the strut tower for you. Please see attached. For your information, there is one slide where we captured the rear quarter panel. Looking at the picture, it is hard to tell as there was a lot of background reflections in it."

The PowerPoint presentation had seven slides. They deserved an entirely new gallery that you can see below. It reveals the exact points of the body that lack a base coat.

All the internal parts of the structure, the ones that receive any sort of finishing, come only with primer. Besides the strut towers, the floor pan is in the slideshow, but the pictures reveal the firewall and the internal parts of the columns also lack base coat. Primer thickness at the strut towers is 25.4 μm. The floor pan primer is 31.8 μm thick. The video below measures the external body panels. The ones that receive the base coat.

As you can see, the paint presents different thickness depending on where it is measured. It goes from 69 μm to 114 μm and is very uneven all over the body. We have asked Steier if that is an acceptable procedure in the automotive industry – at least for developed countries. His answers will probably deserve an entirely new article.

The only person that sent us answers to generic questions on automotive paint was Marco Colosio, director and member of the Materials Commission at SAE Brasil, with more than 30 years of experience in the automotive industry. According to Colosio, it is unlikely to see cars that have no base coat in any part.

“The primer is a physical barrier, but you will always have base coat over it. It is very unlikely that you will only have primer in any body panel.”

As Colosio states, all of them should have that paint layer – but some don’t, as the Etios and the Model 3.

What, then, would be the explanation for the paint defect some Tesla owners are having with their cars? This video shows a Model 3 paint being tested.

We asked Colosio how thick good quality paint should be. Here’s what he had to tell us:

“That depends on many test factors, but it usually has 100 μm. Thickness depends on what each carmaker sets as a resistance requirement for the product considering corrosion, UV exposure, etc.”

We also asked him what else could interfere with good quality paint, such as the drying process.

“Baking time should not alter that, but the layers application and the surface preparation are crucial for that.”

Owners affected by paint problems on the Model 3 are still trying to get Tesla to fix their cars under warranty. The Toyota Etios had no complaints regarding paint except that this lack of base coat made it look cheap(er). Toyota has apparently started to paint the cars entirely after a facelift. We can't tell for sure because the company only produces this sort of standard engine bay picture when the body color helps hide an eventual lack of pigments.

The Model 3 and the Etios have one last thing in common: a central dashboard. The Etios received a digital one after the restyling.

The first analogic one – pictured above – presented a terrible parallax problem. At least Toyota has corrected it. We hope Tesla decides to do the same regarding the Model 3 paint even if it does not paint parts people normally do not see. Not only for new Model 3 units in Gigafactory 3, but also for the ones that already left Fremont long ago.