The secret for their durability seems to be the NMC532 crystals.

We normally credit Jeff Dahn as the man behind the million-mile batteries that Tesla will probably employ in their future vehicles – especially on its pickup truck. But Dahn has a big team of fellow researchers. Jessie Harlow, for example, is the leading author of this article about the million-mile batteries published at JES, or Journal of the Electrochemical Society. 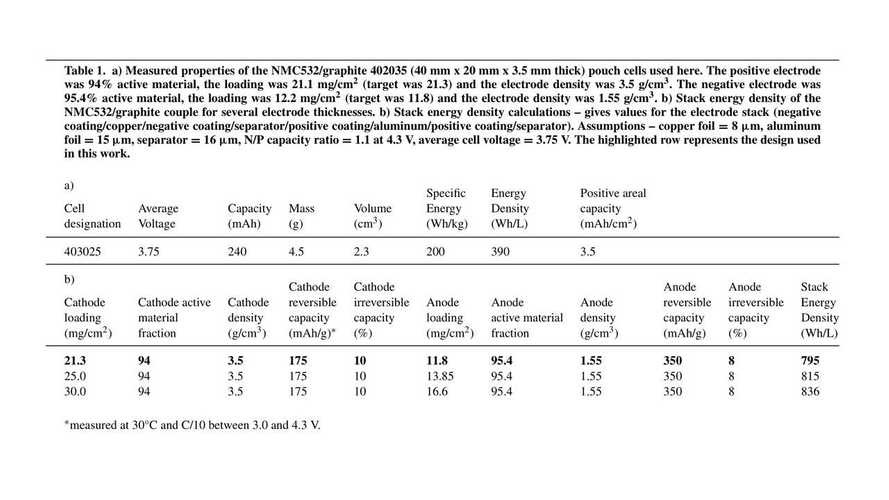 According to the paper, one of the biggest secrets for such durability is NMC532 crystals. Or LiNi0.5Mn0.3Co0.2O2, if you prefer to be more specific. These crystals will compose the new battery’s positive electrode as a single crystal in each cell. The study used tiny pouch cells, not cylindrical ones, such as the cells Tesla currently uses.

The study clarifies interesting aspects of these calculations. If a 400 km battery pack could stand 4,000 cycles without any loss of performance, it would be good for 1,600,000 km – or 1 million miles. But we could also have an 800 km battery pack that deals with 2,000 cycles.

In other words, we can talk about gains not only in durability but also in more energy density. According to the table below, the new Li-Ion cell presents 200 Wh/kg. That’s 33 percent more than the current best Li-Ion cells on the market, at around 150 Wh/kg. But the researchers are not speaking about energy density alone. They really focused on the low degradation presented by the NMC532 crystal.

It is not a miracle this compound achieved alone, for sure. New electrolytes had to be developed to work with it. That allowed the positive electrode to present a robust charging capacity, without microcracks. It also made the group of researchers feel confident enough to write this bold statement on the study:

“We conclude that cells of this type should be able to power an electric vehicle for over 1.6 million kilometers (1 million miles) and last at least two decades in grid energy storage. The authors acknowledge that other cell format-dependent loss, if any, (e.g. cylindrical vs. pouch) may not be captured in these experiments.”

We’ll repeat: “two decades in grid energy storage.” Cars are not currently expected to last that much. On the contrary: with more efficient engines, there’s pressure for a fleet renovation that makes older cars mostly undesirable guests in many countries. You have to pay to get rid of them in most cases.

The article’s title is “A Wide Range of Testing Results on an Excellent Lithium-Ion Cell Chemistry to be used as Benchmarks for New Battery Technologies.”

The generous part of it is that it was published precisely to help other research groups to “re-create these cells and use them as benchmarks for their own R+D efforts be they in the spaces of Li-ion cells or “beyond Li-ion cells.” The more people offering more durable batteries, the better!