They can have seven times the energy density of the best Li-Ion battery possible.

You may think that lithium-ion batteries are the best man can create, but researchers believe otherwise. There are other combinations of elements that are very promising. What about a cell with potential for seven times more energy density than Li-Ion could ever achieve? State of the art for current batteries would be 256 Wh/kg. Lithium-Carbon Dioxide batteries – or Li-CO2, for short – can theoretically reach 1,876 Wh/kg. Researchers at the University of Illinois at Chicago created the first usable Li-CO2 battery. It was tested to up to 500 cycles, and it worked, which is great news. 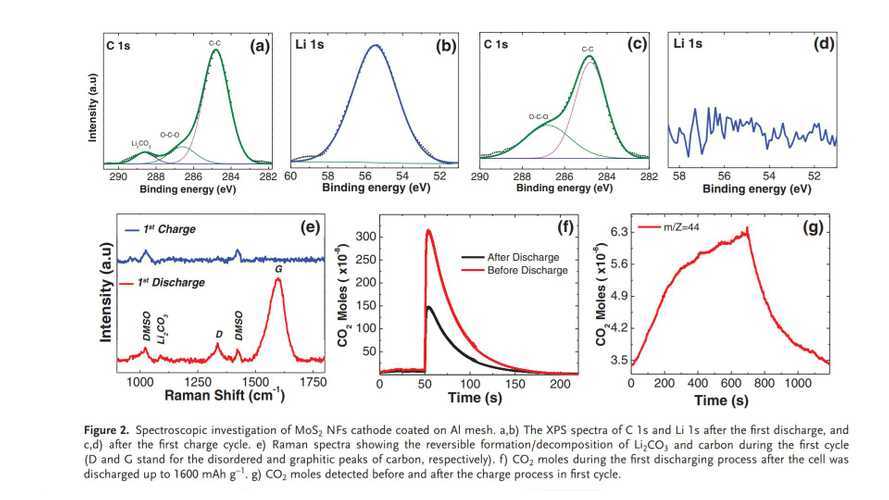 Their research was published in the journal Advanced Materials. And it shows the main problems with these batteries have been addressed and apparently solved.

The primary issue with these batteries is that the chemical reactions they use to generate electricity have carbon and lithium carbonate as byproducts. When charging, the lithium carbonate gets recycled, but not the carbon. It builds up and makes the battery ultimately fail before 100 cycles are completed.

What the researchers have done is a change in the battery composition. They have added molybdenum disulfide as a cathode catalyst. A hybrid electrolyte helped get the carbon back to action when charging the battery, which prevents it from building up.

Their most significant achievement was to have a single multi-component composite instead of separate products. That made charging more efficient.

The study says the following:

“In summary, we developed a rechargeable Li–CO2 battery based on MoS2 NFs that shows reversible cycling at 500 mAh g−1  for 500 cycles, as well as a very high charge/discharge capacity of 60 000 mAh g−1 for one cycle.”

It is a fantastic achievement, comparable to that Lithium-Sulfur – or Li-S – batteries have achieved. The difference is that Li-CO2 batteries would need molybdenum, which is relatively rare. Li-S cells do not rely on critical raw materials and have more potential. While the Li-CO2 batteries could theoretically reach 1,876 Wh/kg, Li-S theoric energy density limit is 2,600 Wh/kg, or 2.6 kWh/kg.

Which one do we prefer? The one that comes to the market first, whether it is 12 or 17 times more energy-dense than current Li-Ion batteries.