According to Victor Yesikov, the car burst into flames a while after charging.

The first argument from people that defend EVs no matter what when a fire happens is that ICE cars also catch fire and no one covers them. That is not true. The original Fiat Tipo once had a huge fire problem in Brazil, and it was all over the news. Whenever a car sets on fire for no apparent reason, that is something worth investigating. Last September 20, a Chevy Bolt EV burst into flames in Kyiv, Ukraine. It is the first fire involving the Bolt that we’re aware of. And it was well documented by Victor Yesikov, a friend of the owner. 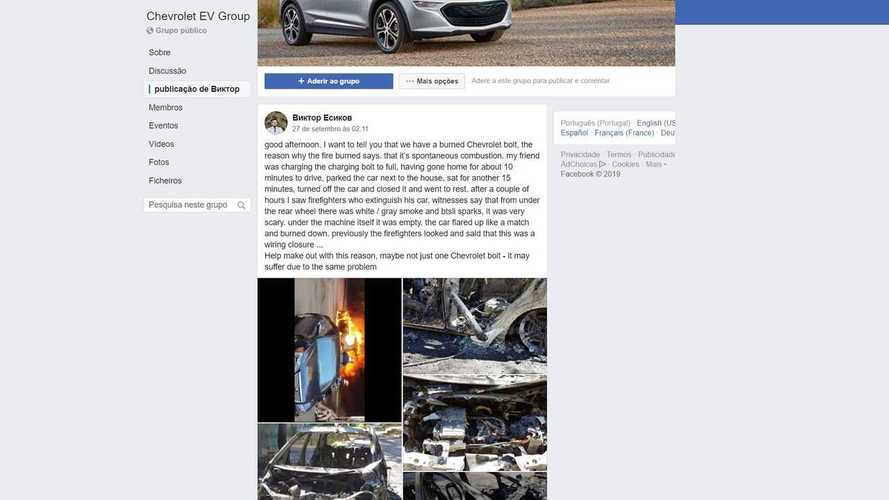 Check this first report from Yesikov at the Chevy EV Group on Facebook:

According to Yesikov, Valeriy fully charged his car, drove it for ten minutes back home, spent 15 minutes inside it, and left it. A couple of hours later, the car started to burn. The description fits what happened to a Hyundai Kona in Canada. This case is still under investigation.

Are EVs More Or Less Likely To Catch Fire Than Combustion Engined Cars?

Some people that saw the beginning of the incident said sparks and white and grey smoke started to spew out of the rear wheel wells. That alone almost excludes any possibility that it was an arson case, as some people have suggested.

When the fire brigaders managed to put off the fire and to investigate the car, they said it was a short circuit. Yesikov made the video above and gently sent it to us so that we could correct its orientation for more comfortable viewing. You can hear some explosions, probably from the batteries.

When he first wrote about the problem, Yesikov mentioned it was spontaneous combustion, but now he prefers to wait for the investigations to determine what was the cause. “Unfortunately it is not clear,” he told InsideEVs.

What do you think that may have provoked the Bolt EV fire in Ukraine? Was it any modification for it to charge in that country? The Chevrolet Bolt is not officially sold in Ukraine, which makes this example an independently imported unit. Yesikov promised to keep us posted and to put us in touch with Laguta Valeriy, the owner of the car. We’ll let you know more about it as soon as we do.