Are EVs More Or Less Likely To Catch Fire Than Combustion Engined Cars? 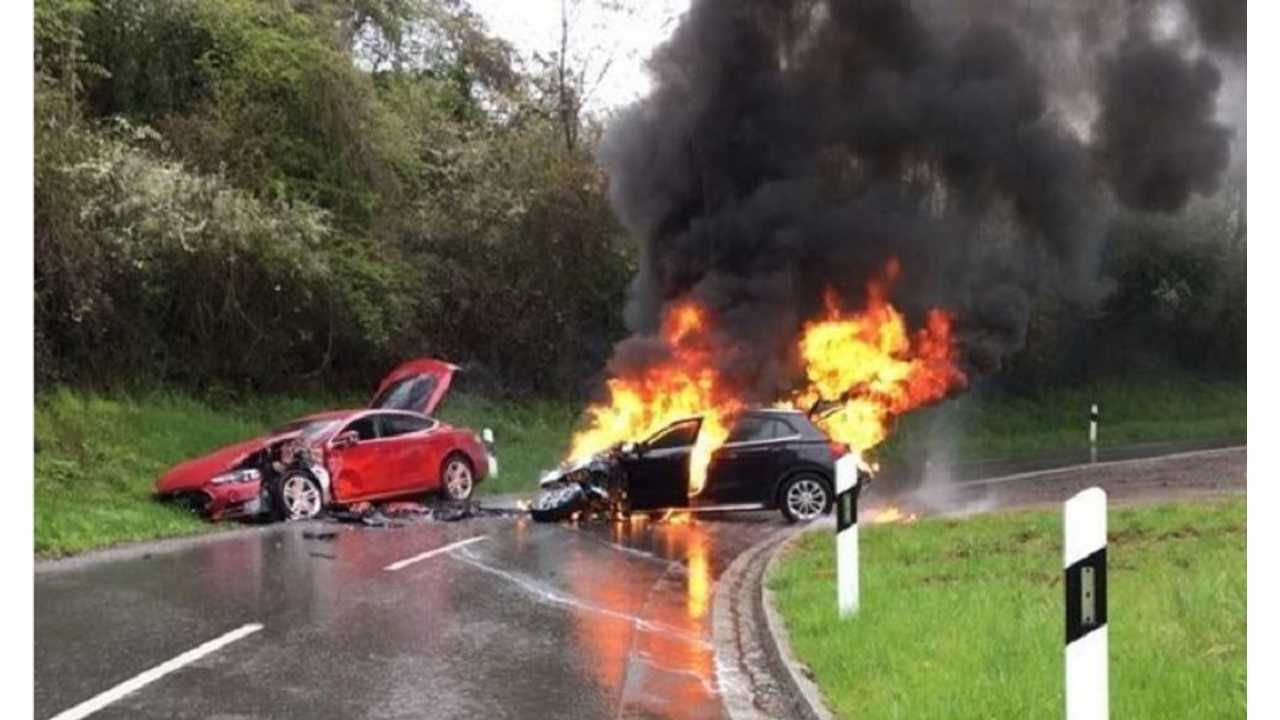 This has been a hot topic since 2012 when two Chevy Volts reportedly caught fire and burned down garages within weeks of each other.

A little history is in order. In 2012, the NHTSA was putting the Chevy Volt through crash simulations. In one particular test, a Volt was subjected to a side impact and a simulated roll. The Volt was then placed outside in an inverted position with a fully charged battery. Though its standard practice to remove the energy in the form of gasoline from a test vehicle, the Volt was left fully charged in the inverted position. Days later, the Volt battery caught fire.

UPDATE: Tesla Model S Catches Fire, Burns To Nothing While Supercharging In Norway

The NHTSA then ordered three batteries from Chevrolet. They began a series of impact tests on the independent batteries outside of the vehicles. The first battery produced no thermal action. The second and third caught fire. A report was released to the public and within weeks two garage fires were reported simultaneously, one in Connecticut and one in North Carolina. It would be reported months later after a thorough investigation that neither of the Volts nor the EVSEs was deemed responsible for the fires, but the media damage was done and the narrative began that EVs are susceptible to catch fire.

So, which vehicle is more likely to catch fire and are their fires equal? Maybe the closest we have to an answer is data provided by Steven Risser, senior leader for Battelle, a nonprofit research and development firm, and one of the leading experts on the risk of fires in electric vehicles.

The propensity and severity of fires and explosions from ... lithium-ion battery systems are anticipated to be somewhat comparable to or perhaps slightly less than those for gasoline or diesel vehicular fuels, according to the results of an in-depth investigation into the relative fire risks of the two types of vehicles conducted by Battelle for the National Highway Traffic Safety Administration in 2017.

Tesla claims that gasoline powered cars are about 11 times more likely to catch fire than a Tesla. They claim that the best comparison is fires per 1 billion miles driven. Today, Tesla is certainly the most visible EV maker on the market. Recently, Tesla achieved two milestones: 500,000 EVs produced globally and an accumulative 10 billion EV miles. Per Elon Musk, there have been five fires per billion miles for Tesla. Most Tesla fires occur after high-speed violent crashes, like the one shown in our recent article.  It's also worth noting that the number of Tesla fires have been reduced since it added additional metal plating to protect the battery.

So, we don’t have definitive data. We have a global number from Tesla and some U.S. numbers compiled for the NHTSA by Battelle. We also have a challenge by none other than Elon Musk who declares its EVs 11-to-1 less likely to catch fire. Steven Risser for Battelle states that EVs are probably less likely to catch fire and probably safer, but still says that more data is required.

For Tesla, with 10 billion miles, it appears that time and data are tracking in their favor. When legacy manufacturers reach a point where their profits depend on EV sales, then maybe we will get the rest of the data that EV enthusiasts already suspect: that this narrative has been a false one or “fake news” right from the start.