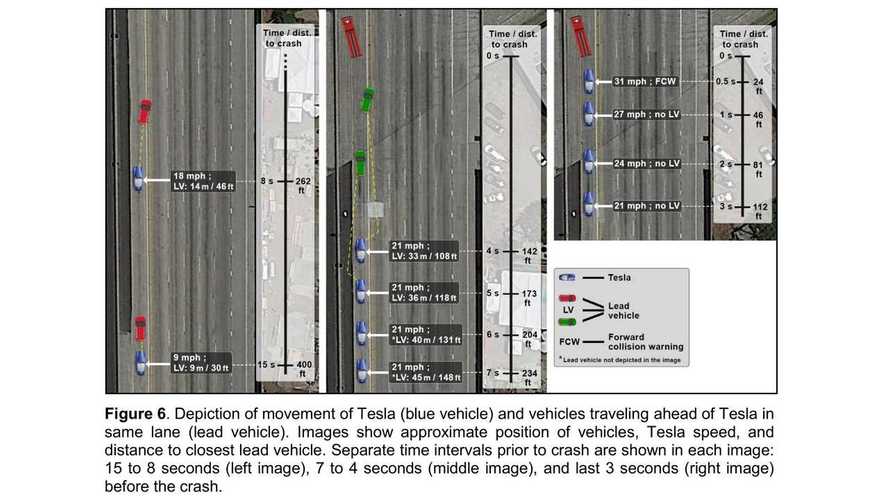 There’s the driver’s, Tesla’s, the witness’ and the truth.

The NTSB – National Transportation Safety Board – released last August 22 its reports on an accident involving a Tesla Model S. It hit the back of a fire truck on an HOV  – High Occupancy Vehicle – lane at I-405 on January 22, 2018. What makes it worthy of our attention is that Autopilot was engaged when the accident happened. In such cases, drivers get the perfect chance to blame someone else for a crash they could have avoided. But only if they have no witnesses around. Robin Geoulla was not that lucky.

The 47-old man was at the wheel of the crashed 2014 Model S. He went for his interview with NTSB with the help of a lawyer, Daniel Geoulla, to whom he is probably related.

There, he claimed to have set his Autopilot for a top speed of 65 mph. Geoulla also said that Tesla put a misleading name in its “very good cruise control with a little bit more advanced technology in it.” He also said the fire brigaders failed to sign the road with cones or flares properly.

Geoulla – the driver – complains that Autopilot does not work correctly when driving towards the sun since its rays hit the cameras directly. He also says he only uses the system in straight lines. Finally, he suggests his car’s Autopilot system was never in full health:

What the witness said

Geoulla was probably not aware, but the passenger of a nearby Toyota Prius was paying close attention to him. “He appeared to be looking down at a cell phone or other device he was holding in his left hand.”

According to this witness, who had his name protected – despite being Mary Naylor’s fiancé – they noticed the fire truck on the HOV lane they were using. When they were moving to the right lane to avoid it, he “noticed a dark-colored vehicle pass by us in the HOV lane at a greater speed than we were traveling.”

Everything developed very fast. Anyway, the witness could see the Tesla driver “was very focused on his phone." He also said Geoulla "wasn't watching the road ahead at all, even though he was quickly approaching the stopped fire engine.”

NTSB states its investigators have analyzed Geoulla’s phone and concluded he did not use it for texting or talking. Anyway, “the records does (sic) not reflect information about manual manipulation of the device or the use of applications within the phone.”

The witness probably paid a lot of attention because his fiancée’s Prius was too close to the Tesla. “We were scared he might try to swerve right into our lane at the last second and possibly crash into our vehicle,” he told NTSB. As you already know, Geoulla didn’t.

Tesla’s records tell that Geoulla’s ride took 66 minutes and 9 seconds. Of this total travel time, Autopilot was active for 29 minutes and 4 seconds. While it was on, Geoulla only applied steering wheel torque for 78 seconds. Or for 1 minute and 18 seconds.

The data also reveals that Geoulla set the max speed to be 80 mph, not 65 mph, as he told NTSB. He also said he fixed the maximum distance from the car ahead that Autopilot allows. Yet, the maximum length registered was supposedly 148 ft (45 m).

We say “supposedly” because a graphic presented by NTSB says the maximum distance was 25 m 101 seconds before the crash. The main image gives us different info. Unfortunately, this is not the only problem the reports present.

The “Factual Report of Investigation” says the crash happened “ on Thursday, January 22, 2018,” but that day was a Monday. It also informs this: “On January 22, 2018, the Tesla driver participated in a recorded interview with NTSB investigators about the events of the crash.” The interview transcript dates from January 26, Friday.

The factual report also states the witness’ statement was obtained by “staff from the Tesla corporate office.” Shouldn’t the witness have gone directly to NTSB for an interview or the written statement itself?

Ironically, it is Tesla’s data that allows us to know probably the only flaw the system has presented. It matches something Geoullas described in his interview.

According to Geoullas, he saw the vehicle in front of his move to the right lane. Soon after that, he crashed.

Tesla’s data shows that happened precisely 4.1 seconds before the crash – when the car was going 21 mph. Three seconds before the accident, the closest vehicle was detected at 120 m by Autopilot. The issue is that the fire engine was 112 ft (34.4 m) ahead. The Model S started to accelerate. It eventually hit the back of the truck at 30.9 mph.

When Autopilot finally detected the fire engine, there were 490 milliseconds before impact. Check what the report informs about this almost half a second reaction interval:

“At that time, the forward collision warning was activated; the system presented a visual and auditory warning. Data also shows that the AEB did not engage and that there was no driver-applied braking of steering prior to the crash. According to Tesla, the AEB was active at the time of the crash, and considering that the stopped fire truck was detected about half a second before impact, there likely was not sufficient time to activate the AEB.”

With versions of all the people and the company involved with this accident, there are a few undeniable facts.

The first is that Geoulla tried to avoid responsibility by incorrectly informing what actually happened to NTSB. His Model S accelerated that much because it had a top speed well above the maximum allowed for the I-405.

Although he said he always drove his Tesla very carefully, he didn’t. He was not paying attention to the road. Otherwise, he would have had time to brake his car, and change lanes like everyone else did that day apart from him – as far as we know.

The factual report states the fire truck had fully functional flares. The California Highway Patrol report says they were activated and that the fire engine stopped that way “due to the safety of the fireman and the equipment on the emergency vehicle.” In other words, if the fire truck wasn't there, Geoulla's Tesla could have hit the fire truck's crew. The CHP conclusion is the following:

The second is that Autopilot did not detect the truck from a distance of 112 ft. Perhaps there is a detection delay issue with it that Tesla should quickly address. Or driving towards the sun indeed makes it malfunction. We will probably never know for sure.

The question is: does it change the fact that Geoulla should be paying attention to the road? If he criticizes Autopilot for its “false sense of… Autopilot”, did he trust it was a fully autonomous vehicle?

Kenneth Bragg is the Human Performance Investigator at NTSB and the man who interviewed Geoulla. He asks the Tesla driver the following about the supposedly deceiving name: “Did this crash help you come to that conclusion or…” The Tesla driver answers:

“No, no. I always knew that and I always take... I always drive that car very careful.”

Moments before that, Geoulla said this:

“Because when they tell you it's Autopilot, you're saying, okay, it's Autopilot. It's not. It will help you and... but you have to be aware of your surrounding (sic) and everything.”

Gallery: The Four Sides Of A Tesla Autopilot Crash Are Revealed By NTSB

What May Have Caused This Triple Accident Supposedly With A Model S?
++8