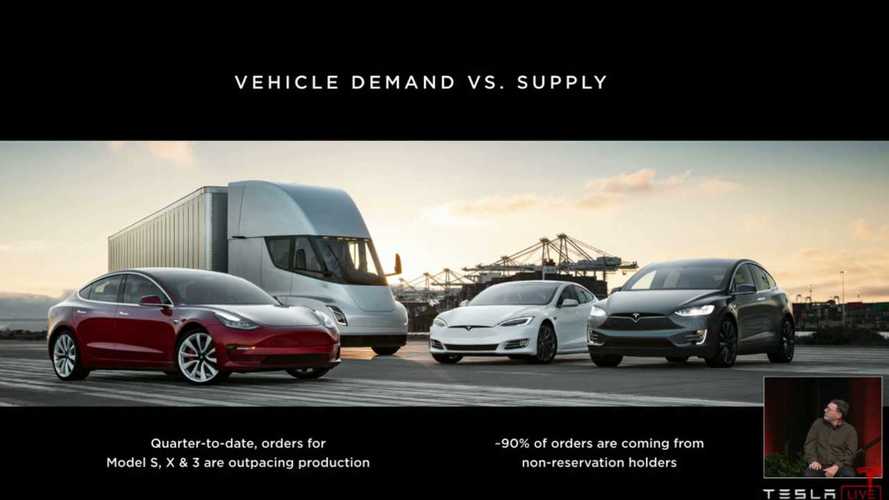 Tesla is growing spherically, in all directions simultaneously

The most recent Tesla Annual Shareholders Meeting bring us a lot of new info about what is happening at the world's largest all-electric car manufacturer, as well as important confirmation of previously set targets.

Record quarter on the horizon

First of all, Tesla is expecting that current quarter (Q2 2019) to be the record one in history, although at the same time Elon Musk adds that profitability is challenging when the company expands quickly. The answer for that could be to slow down with various projects and note some income, but it's rather not the case in the near future.

We could only add that if manufacturers with close to 10 million car sales annually are looking for mergers and alliances, there is probably no way for Tesla to stop halfway to its first million. The growth is a necessity.

Tesla says that there is no issue with demand as combined demand for Model S, Model X and Model 3 is higher than combined production capacity.

Elon Musk, however, didn't say how the situation looks for the refreshed Model S/X separately to the Model 3.

A big part of the presentation was focused on the Tesla Model 3 - which is the best selling model in the U.S. in terms of revenue.

An interesting insight is that customers often are trading up for the Model 3, from the non-premium segments.

Tesla boasted that its cars are the most efficient and offer the highest range among higher-end models. Moreover, the EPA range of 2012 Model S still hasn't been matched by any other model seven years later.

Elon Musk hinted that it shouldn't take long to reach 400 miles (644 km) of range. We guess it might be even this year.

The most important things

According to Tesla, investors should focus on the most important things for the future of the company and automotive industry like:

The self-driving feature will be completed by the end of this year.

Key to further expand the business is also to expand the Supercharging and service center network according to Musk.

Tesla intends to produce the Tesla Model Y at the Fremont Factory in volume by late 2020 (maybe sooner) with a range of some 300 miles (483 km).

As the Model Y segment is roughly 2.5-times bigger than Model 3, also the sales perspective are huge.

Elon Musk announced that this summer he hopes to unveil the all-electric Pickup Truck, which was called a Cyberpunk Truck.

According to Musk, the truck is the coolest car he has ever seen and looks like it's from a science fiction movie.

The pickup will be more functional than Ford F150 and offer better "performance" than a base Porsche 911.

In the case of the Tesla Semi - production should start at the end of 2020, but a lot depends on the battery cell and pack production capacity. Those are the most limiting factors, according to Musk.

We can just assume that production of 1,000 trucks per year with 1,000 kWh battery packs each is 1 GWh per year. Not that much to be fully convinced about claimed battery constraints.

We should learn more about the latest Tesla battery and powertrain tech at the upcoming Battery and Powertrain Investor Day, expected this summer or in late 2019.

It could be the first time when Tesla will show how Maxwell's tech can improve batteries.

Tesla expects to increase battery energy storage deployment in 2019 to be two times higher than the 1 GWh in 2018.

The Solar Roof is progressing with new installations in 8 states, but the most important parts is about a 3rd version under development. In other words, Tesla still needs to forge the ultimate version of the product to succeed.

Asked about the land cost, Elon Musk said that in many cases rates are low, land is free or some even pay Tesla to install Supercharging station to attract traffic.

No details yet, but Tesla is close to releasing an in-house insurance offer. Maybe some small acquisition will be needed to jump-start the project.

The lithium-ion cell production potential of the Tesla Gigafactory in Nevada is 35 GWh annually, but according to Musk, only 70-80% in reality (25-28 GWh). The remaining potential will be unleashed by the end of this year or early next year.

Tesla Gigafactory 3 in Shanghai, China to start production by the end of 2019. The initial volume production target is 150,000 Model 3 annually.

In the future, it could produce hundreds of thousands of cars annually.

At least one gigafactory will be built per continent and Tesla is still searching for a location in Europe. The decision could be made by the end of this year.

The last news is Drew Baglino - Tesla’s vice president of technology, introduced on the stage along with J.B. Straubel, Tesla’s chief technology officer.

We guess that Tesla is getting so big with all the projects that maybe J.B. Straubel will be focusing more on some things, while the other tasks need to be taken on by someone else.