Mercedes Scores Record Order For eCitaro: Some With Solid-State Batteries 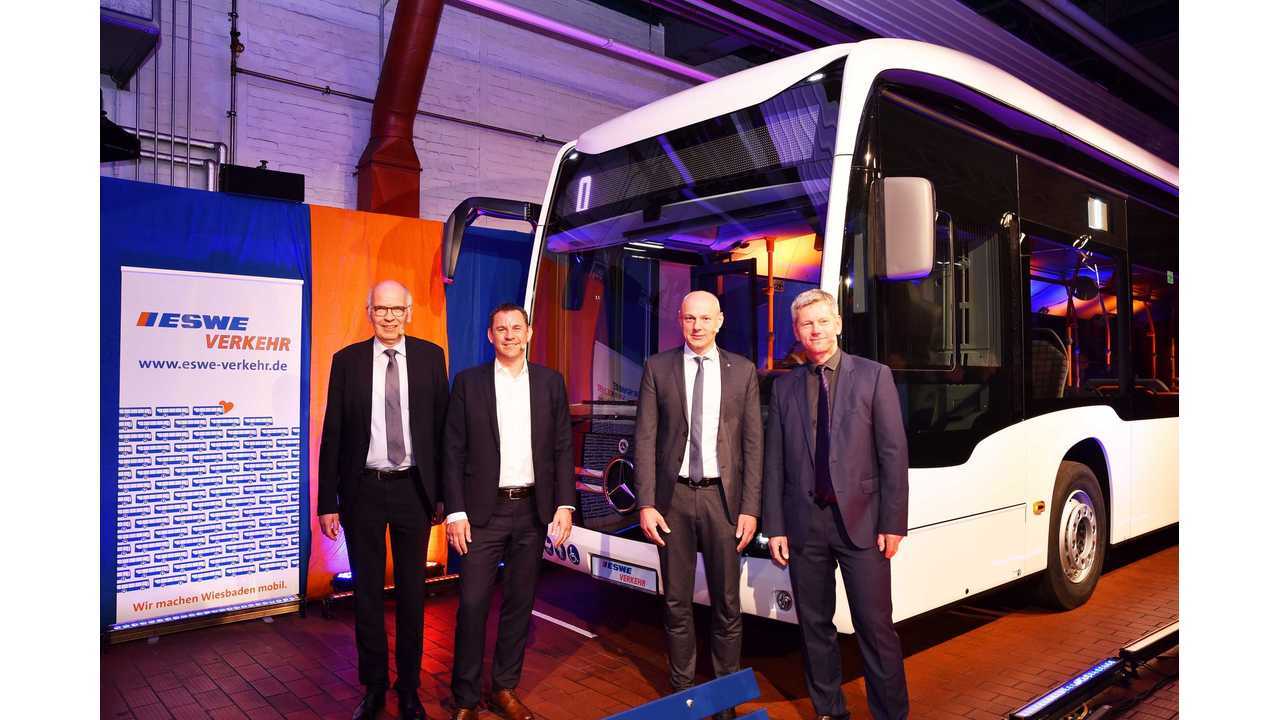 The order comes from ESWE Verkehrsgesellschaft mbH from Wiesbaden in Germany's Hesse region, which operates 271 buses and would like to electrify one fifth by the end of 2020.

The first 10 buses are to be delivered later this year, while the remaining 46 in 2020.

The other interesting news is that the Mercedes-Benz eCitaro is now available for order also with new 441 kWh solid-state batteries. The solid-state batteries supplied by Bollore’s Blue Solution were announced in 2018. Those are the batteries known also as Lithium Metal Polymer (LMP), which are however required to operate at a high temperature of 60-80°C.

Equipped with the 441 kWh packs, the buses will be able to drive 200 km (124 miles) in SORT2 test cycle in winter conditions.

The first 15 buses for ESWE will be 292 kWh NMC batteries (lithium-nickel-manganese-cobalt-oxide cells), while the remaining 41 are to be 441 kWh high-temperature solid-state batteries.

Stuttgart / Wiesbaden – Mercedes‑Benz has received a record-breaking order for the eCitaro electric urban bus. This massive order comes from the public transport company ESWE Verkehrsgesellschaft mbH from Wiesbaden in Germany's Hesse region. As a provider of comprehensive electromobility solutions, Mercedes‑B enz doesn't just deliver electric buses, it also takes care of the adaptation of the service yard, the equipment and setting up of charging infrastructure, as well as the charging management process itself. With this commission, the city of Wiesbaden is switching a fifth of its bus fleet to electromobility within a short period of time.

Ulrich Bastert, Head of Marketing, Sales and Customer Services at Daimler Buses: "Due to its outstanding features, the new eCitaro has won through in no time. Wiesbaden's invitation to tender however also shows the systemic challenges involved in the introduction of e-mobility, which we are happy to play a part in."

Frank Gäfgen, Managing Director at ESWE: "We are now starting to realise our vision of emission-free driving in Wiesbaden's public transport. And in this regard, we want to take the lead in Germany."

Presented as recently as last autumn at the IAA Commercial Vehicles, the fully electrically powered and locally emission-free Mercedes-Benz eCitaro city bus is taking cities by storm. Its newest record is the large-scale order for 56 buses from ESWE Verkehrsgesellschaft mbH in Wiesbaden. The state capital of Hesse will receive the first ten eCitaro buses from the order this year already, while the remaining buses will be delivered next year.

The first 15 eCitaro for Wiesbaden will be equipped with current-generation lithium-ion batteries. These are NMC batteries (lithium-nickel-manganese-cobalt-oxide cells). Each eCitaro is equipped with twelve battery packs with a total capacity of 292 kWh.

The remaining 41 eCitaro will be equipped with solid-state batteries. With this new battery technology, the eCitaro once again takes on a leading role, and is even among the pioneers in automotive construction. Solid-state batteries have a very high energy density. In this case, seven battery packs are sufficient in order to provide a huge battery capacity of 441 kWh. Even in winter when faced with the difficult demands of using all-electric heating, the eCitaro can still cover more than 200 km according to the SORT 2 testing method. All 56 buses are charged by plug in the depot.

Electric bus and infrastructure from a single source

A special aspect here is that Mercedes-Benz has taken on the role of general contractor, supplying the complete system including the construction measures for the infrastructure – a first in Germany. In this context, the existing depot will be reorganised, modified and successively equipped with charging stations for the buses. Planned tasks even include building the transformer station for converting medium-voltage to low-voltage electricity as well as the installation of cables on the site.

Ulrich Bastert: "Using the example of Wiesbaden, we want to gain a full and detailed understanding of introducing e-mobility in all of its multiple aspects in order to derive new ideas on how to optimise the overall system. But particularly due to limited capacity, this is going to remain an exception at least for the foreseeable future."

Charging management is also part of the order. It will be realised together with the Berlin-based partner company IVU Traffic Technologies, a renowned specialist for customised IT solutions. First of all, this involves assigning each bus a defined charging point upon arrival at the depot. Smart charging management ensures that all buses are charged with the necessary amount of electricity for their next trip. This also includes preconditioning, i.e. the temperature control of the passenger compartment and batteries, and thus ensures maximum efficiency. Vehicle servicing for ESWE's eCitaro buses will be carried out in co-operation with Taunus Auto Verkauf AG (TAV) located in the immediate vicinity.

ESWE Verkehrsgesellschaft mbH operates Wiesbaden's local public transport and has a fleet of 271 buses. With 41 bus lines, its buses transport nearly 60 million passengers a year. Of its roughly 1100 employees, two thirds work in the transport service. With the introduction of the eCitaro, ESWE is putting an ambitious plan into effect: within just one year, the company is changing a fifth of its bus fleet to fully electric vehicles.

The majority of the vehicles in the fleet are Mercedes-Benz Citaro. Mercedes-Benz and ESWE Verkehr have been cultivating a successful business partnership for a long time. This is not only evident in two classic city buses with the three-pointed star built in 1961 and 1983. For example, ESWE Verkehr took over the first low-emissions Citaro compliant with the Euro VI norm in 2012. It had previously had its world premiere in public there.

With the support of the transportation company, Mercedes-Benz also held its much-noticed Record Run. At this neutrally supervised competition held under real-world conditions in Wiesbaden city traffic, the Euro-VI-compliant Citaro achieved a fuel consumption advantage of 8.5 percent compared to its predecessor model, with correspondingly lower CO2 emissions.

With the Mercedes-Benz eCitaro, the company is now taking another major step forward: ESWE Verkehr and the city of Wiesbaden have set themselves the ambitious goal of realising the vision of emission-free local transport as the first city in Germany.